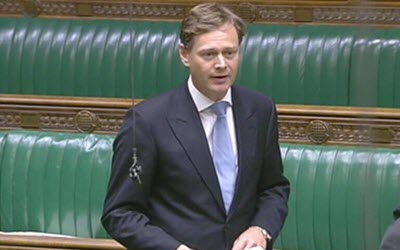 NCRI – The United Kingdom’s House of Commons held a debate on Tuesday, June 28, on the human rights situation in Iran. The British Parliamentarians discussed the lack of progress on the matter since last year’s nuclear deal.

Dr Matthew Offord, the Conservative MP for Hendon, said: “I regretted Her Majesty’s Government’s decision to decouple Iran’s human rights abuses and support for terrorism from the nuclear negotiations. I believe that that was a lost opportunity, and that doing so sent the wrong message to Iran.”

In fact, the suppression of free speech and political dissidence has risen with a wave of arrests of human rights activists, union leaders, opposition supporters and journalists. They were held on bogus national security claims and some still remain in prison, where they are subject to torture.

The MPs discussed the fate of political prisoners like Jafar Azmizadeh, who has been on hunger strike for more than two months, Narges Mohammadi, who has been denied access to her medication, and Saleh Kohandel, who has been tortured and at times kept in solitary confinement over the past nine years simply for supporting the main Iranian opposition group People’s Mojahedin Organization of Iran (PMOI or MEK).

The execution rate in Iran has also increased rapidly during the course of Hassan Rouhani’s presidency, the MPs pointed out. An estimated 2,400 people (including women and minors) have been executed by the regime in just three years; in 2015 alone, the UN estimates that there were almost 1,000 people put to death by the state.

Mike Freer, the Conservative MP for Finchley and Golders Green, said: “Many of us were encouraged to support the lifting of sanctions in order to see a thaw in the repression of the regime. Given the acceleration in the use of the death penalty, the continued persecution of women and minorities, and the crushing of the opposition…we have been duped.”

Sir Roger Gale, Conservative MP for North Thanet, said that the National Council of Resistance of Iran (NCRI) and the People’s Mujahedin Organisation of Iran (PMOI) ought to receive international support in their campaign to overthrow the regime.

The MPs quoted Amnesty International’s former deputy director for the Middle East and North Africa programme, Said Boumedouha, who said that the “staggering execution toll” painted a “sinister” picture of the state and accused them of carrying out “premeditated, judicially-sanctioned killings on a mass scale.”

Boumedouha made that speech in July 2015, but the MPs said that nothing much had changed in the time since the nuclear deal was passed.

In fact, it’s highly suspected that the money raised through the nuclear deal will fund the Iranian regime’s Islamic Revolutionary Guards Corps (IRGC), who were designated as a terrorist organisation by the U.S.

Margaret Ferrier and Dr Philippa Whitford, the SNP MPs from Rutherglen and Hamilton West, and Central Ayrshire, respectively, reminded the Parliament of the harsh realities for women and girls in Iran; women can be lashed for not wearing the hijab correctly, women can be denied food, accommodation or money if they do not perform marital duties and girls as young as nine can be forced into marriage with full-grown adult men.

Dr. Offord rejects the idea that human rights abuses are the result of hardliners as it implies that Rouhani is unable to stop them.

He said: “Neither Rouhani nor his Government have ever publicly condemned and distanced themselves from executions and the use of public hanging. On the contrary, Rouhani has explicitly supported the use of the death penalty. “

A Free Iran rally will be held on July 9, in Paris, attended by politicians, world leaders and the supporters of the Iranian opposition PMOI.

Mr Mark Williams, a Liberal Democrat MP from Ceredigion in Wales said that he, like Dr. Offord, has “attended the annual gatherings in Paris sponsored by the National Council of Resistance of Iran.”

“At those meetings there are always many opportunities to talk to Iranian exiles from around the world. Perhaps 100,000 people go to those gatherings whose families have direct experience of human rights violations. All too often they have been denied the opportunity to communicate with family at home in Iran, for fear of repercussions; and, indeed, we meet people who have experienced persecution themselves.”

“Our approach to Iran should include an active and direct dialogue with opposition groups committed to democratic change and the most basic human rights that should be common to any civilised society. … People understand that the PMOI and Madam [Maryam] Rajavi are fighters for democratic change. That is what she has said, and it is reinforced by the 10-point programme we have heard about,” he added.