European Parliament Award for Gerard Deprez, the President of the Friends of a Free Iran 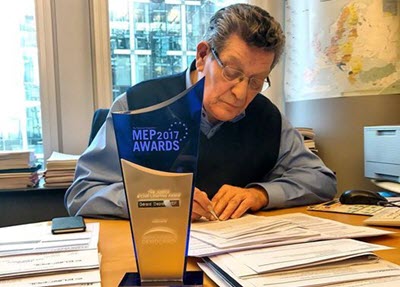 NCRI – Gerard Deprez, was awarded the European Parliament Member of the Year 2017 award on justice and civil liberties. Mr. Deprez is a member of European Parliament and minister in Belgium’s government, who currently holds the presidency of the Friends of a Free Iran intergroup consisting of more than 200 representatives from different European countries as well as various political groups in European Parliament,
The award was given by the Parliament magazine in a ceremony held on Wednesday March 22 in Brussels.

Deprez’s victory during the awards ceremony was announced by Mrs. Roberta Bonazzi, founder and president of the European Foundation for Democracy, who said after congratulating him “I’m honored to announce Mr. Deprez as the winner of the MEP awards 2017 on justice and civil liberties. There are major challenges ahead to prevent extremism.”

“This award is given to me for my efforts in the European Parliament’s Committee on Civil Liberties, Justice, and Home Affairs in which I specifically address European policy towards fight against extremism and terror”, he said.

“This award strengthens my resolve to continue my efforts in Civil Liberties, Justice, and Home Affairs Committee as well as the Budget Committee,” he added, “I’ll go to the Europol’s headquarters in the Hague tomorrow to talk to the members of the European Counter-Terrorism Center.”

Gerard Deprez, president of the Friends of a Free Iran group in the European Parliament, is one of the most prominent European politicians who, in addition to supporting the Resistance of Iran in its fight against Iranian regime’s religious fascism and its major sponsoring of terrorism and extremism, has in his speeches in the European Parliament and other conferences constantly condemned the violation of human, civil, and social rights of the Iranian people as well as exporting terrorism and regional interventions by the Mullahs’ regime. Mr. Deprez has also supported Maryam Rajavi’s program to liberate Iran from religious dictatorship and establish a republic based on democracy, human rights, equal rights for women and men, and separation of church and state.

The MEP awards on different areas are awarded annually by the Parliament magazine.