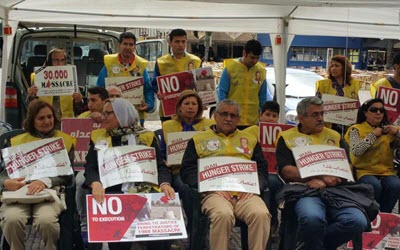 The Dutch-Iranian community on Wednesday began a three-day hunger strike and sit-in at the parliament in The Hague in protest at the rise in executions in Iran and, particularly, the very recent wave of hangings of political prisoners.

The United Nations and Amnesty International have reported on the rise in executions under the regime’s President, Hassan Rouhani. More than 2600 people have been executed on his watch, with dozens hanged in the past two weeks, the protesters pointed out in The Hague.

The protesters want to demonstrate their solidarity with both the families of those executed and political prisoners suffering torture and the threat of execution without due process.

The Dutch-Iranian community has urged the Netherlands government to categorically condemn the executions in Iran and to act with allies to call for an immediate halt to executions and torture in Iran.

The three-day protest also coincides with the 1988 massacre of more than 30,000 political prisoners in Iran, mostly members of the People’s Mojahedin Organization of Iran (PMOI or MEK), the main opposition movement. The 30,000 were already serving their sentences when they were summarily executed upon a fatwa, issued by Khomeini.

The protestors have called on the UN Security Council to form an international court to prosecute those responsible for the 1988 massacre in Iran.

The protest in The Hague will continue on Thursday and Friday.