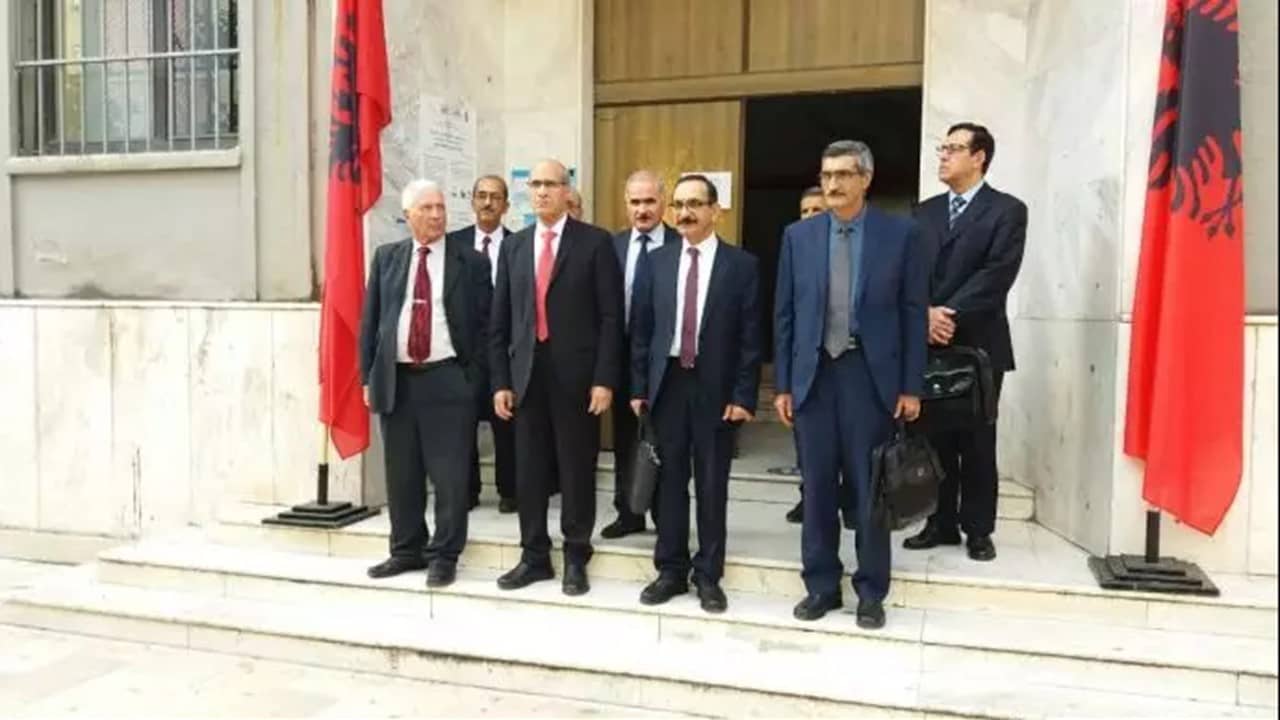 Tuesday marked the thirty-ninth session of Hamid Noury’s trial, and an Iranian prison official was charged with participation in the 1988 massacre of political prisoners. Noury was in Gohardasht prison at the time of the massacre. In 2019, he was incarcerated in Sweden.

The last five sessions of Noury’s trial have been held in Albania. The location of the trial was transferred after 34 sessions in Sweden to Albania per prosecutors’ requests, where there are thousands of members of the Mujahedin-e Khalq (MEK). The MEK members were the main target of the 1988 massacre of over 30,000 political prisoners across Iran.

On Tuesday’s session at the District Court of Durres, Mahmoud Royaei, a former political prisoner and a MEK member, testified. Royal spent ten years in prison. He is one of the survivors of the 1988 massacre.

“In March 1986, I was transferred from Ghezelhesar to Gohardasht prison,” he said.

“In March 1988, a group of prisoners was brought from Kermanshah to Gohardasht. We did not know why the authorities had done this, but we later found out that this was part of the plan to classify the prisoners, a plan that had been carried out by Davoud Lashgari, Nasserian [Mohammad Moghiseh], and Hamid Abbasi [Noury] in February 1988,” he said, underlining that the regime had planned for the execution for months.

“I heard a conversation while I was in my cell,” he said. According to Davoud Lashgari, a well-known torturer said: “We’re classifying them.”

“At that time, I didn’t understand what he meant. But when they separated Marxist prisoners from the rest of us and transferred several others to Ward 1, I understood,” Royaei said.

Royaei also testified that Massoud Moghbeli had sent a message from his cell in April that his interrogator had told him: “We would soon finalize your situation, and there will be a purge.” Moghbeli was executed during the 1988 massacre.

“They asked them what their accusation was. As soon as they said they were supporters of the MEK, the guards severely beat them. One or two hours later, they were brought back, bruised and bloodied. The guards said, we’ll come back for you on Saturday,” he added.

“On July 30, around noon, I was speaking to one of the inmates when we heard the news that there were some suspicious movements around one of the warehouses,” Royaei said.

Like other witnesses at Hamid Noury’s trial, Royaei had also seen guards taking hanging rope to the warehouse in wheelbarrows. This warehouse later became known as the “Death Hall,” where prisoners were executed.

“These series of events reminded us of the dark memories of 1981. Every night, hundreds of prisoners were executed while the authorities shouted ‘Death to the Monafegh’ [the term the regime uses to refer to the MEK,” Royaei said. “I personally thought that they can’t execute everyone, and it would have a very heavy price for them. I thought that they were only executing the group of prisoners who had been transferred from Mashhad to Gohardasht.”

“At around 8 pm, one of the guards came to our ward and asked, ‘What was the name of Massoud Ghahremani’s father?’ I was puzzled at why he said ‘was’ and not ‘is,’” Royaei said.

“On July 31, I was talking with Mohammad Reza Hejazi. He had been transferred to Gohardasht from Karaj prison, and his sentence had finished a year ago,” Royaei said, “I told Mohammad Reza that your sentence is finished. The prosecutor of Karaj has said that you will be released next week. He told me, ‘Didn’t you see the hanging ropes? Khomeini will not leave us alone.’”

According to Roayei, a guard took Hejazi and several other prisoners soon after. These prisoners had come from Karaj prison. “It became clear to us that the first executions were from the prisoners of Karaj because [Ebrahim] Raisi was the prosecutor of Karaj and personally knew them,” Roayei said, referring to the key role played by the regime’s current president, Ebrahim Raisi in the 1988 massacre.

Raisi was a member of the infamous “Death Commission,” which identified staunch MEK supporters and sentenced them to death in kangaroo trials. These commissions were implementing a fatwa by the regime’s then-Supreme Leader, Ruhollah Khomeini, ordering the execution of all MEK members.

“On August 1, Lashgari came to the ward and said all prisoners who had been sentenced to ten years or more in prison to come out,” Royaei said. “I think we were 70 or more prisoners who had more than ten years. We were taken out of those cells and taken to another section. He asked our names and accusations. Anyone who said MEK supporter was separated from others.”

“Thirty-five of us were taken to one of the sections on the first floor. The rest were sent to solitary confinement,” Royaei said.

Later, Royaei was taken to a corridor that later became known as the “Death Corridor.” “I saw prisoners sitting on both sides [of the corridor], and I was told to sit,” Royaei said.

“Many prisoners were sitting. I looked from under my blindfold. I didn’t know a lot of them. After about half an hour, I recognized the voice of Hamid Abbasi [Noury] calling names. I pushed up my blindfold a bit and saw Hamid Abbasi standing in the middle of the hallway and reading names,” Royaei said.

While witnessing his friends and other prisoners going for execution, Royaei waited for his turn.

“Around 5 or 6 pm, Nasserian came and said, ‘Get up.’ He took me to the Death Commission,” Royaei said. “When I got in the room, there was a chair. I sat down, and they told me to remove my blindfold. There was a long table, and behind it were sitting two clerics and two individuals in plain clothes. Sitting across me was [Hossein Ali] Nayyeri. I didn’t recognize the other ones, but among the members of the Death Commission were [Mostafa] Pourmohammadi, the representative of the intelligence ministry, whom I didn’t know; [Morteza] Eshraghi, who was wearing plain clothes and I knew him; and there was Raisi whom I thought to be a prison guard because when I saw him, he was walking and holding a string of prayer beads,” Royaei recalled.

“Nayyeri asked, what is your accusation? I said ‘supporter.’ He said ‘supporter of who?’ I said, ‘MEK,” Mahmoud Royaei testified. “There was another person there—I don’t remember who he was—he asked what do you think about the MEK? I said I had no opinion. He said, ‘How can you not have an opinion? Is it possible to have no opinion?’ I said that I’ve been in prison for seven years and have no news and thus no opinion.”

“Pourmohammadi or [Esmail] Shoushtari said, ‘We are the pardon commission. We want to release some of the prisoners. We want to know if you’re willing to do an interview and write a letter of regret,” Royaei said.

“When I got out of the room, Eshraghi came to me and said, ‘Write it down.’ I said, ‘I haven’t said anything.’ He said, ‘Write down that if you are released, you will have nothing to do with anyone.’”

“I was taken to the room of the court assistant. He gave me a paper. I removed my blindfold and wrote down that if I am released, I will have nothing to do with anyone. When it was over, a guard came, and I handed the paper to him,” Royaei testified.

“I tried to go to the place where many prisoners were sitting. One of the guards who were there told me to go back and that my name wasn’t there. I went to the bathroom and heard Nasserian calling my name. I ignored him. Minutes later, I went back to the corridor,” Royaei said.

There he sees Hamid Noury, also known as Abbasi. “I was sitting at less than a meter of Hamid Abbasi. I didn’t need to see his face to recognize him. I could see a few meters from under the blindfold. I knew exactly to whom each pair of pants and shoes belong,” Royaei said. “All the guards were wearing military attire. But Nasserian and Hamid Abbasi were wearing plain clothes.”

Exhibition in Ashraf 3, Albania: Gohardasht Prison Death hall in the 1988 massacre in Iran

Shortly after, Nasserian takes Roayei back to the Death Commission.

“They started insulting me and what I had written on that paper. They said, ‘Are you illiterate? How come you haven’t written your name and signed the paper. You haven’t written your opinion about the MEK. You’ve just written that you will not bother anyone if you’re released,’” Royaei said. “Pourmohammadi gave me a paper and said write like this.”

“I didn’t read the entire text. It was a whole page. When I saw the request for a pardon, I returned the paper and said, ‘I have nothing to do with this. I was in prison when the prime minister’s office was blown up. I’m not asking for pardon.’ Pourmohammadi told me to get out,” Royaei said.

When Royaei comes out of the room, Eshragi gives him his paper and tells him to write his credentials and his opinion about the MEK. “I added four or five lines, said that I have no opinion about the MEK and if I’m released, I will not work with any party or group,” Royaei said.

“On August 3, when they twice called me to the Death Commission, I never believed that it was a Parole Commission. I also didn’t realize the vast number of executions,” Royaei said. “The Death Commission members that I saw I realized they were senior figures because I knew Nayyeri was such.”

On Tuesday, simultaneous with Hamid Noury’s trial, families of the regime’s victims and the MEK members gathered outside the District Court of Durres. They shared their stories with the press and also shed light on the regime’s four decades of human rights violations. Besides, the MEK members in Ashraf 3 held a ceremony, paying tribute to the fallen heroes in the struggle for freedom in the last forty years.

Iranians, supporters of the MEK, and family members of victims of the mullahs’ regime, also held a protest on Tuesday in Sweden. Since Noury’s trial began in Sweden, the MEK supporters have been holding protests. On Tuesday, while holding pictures of the 1988 massacre martyrs, the MEK supporters pledged to continue their path.