Iran: A prisoner killed under torture 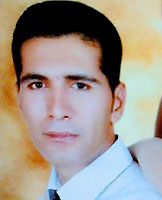 Amir, a father of a three year old son, and a respected athletic among his friends and residents of southern city of Shiraz, was being chased for a long time by the agents of Iranian regime’s Ministry of Intelligence and Ministry and Revolutionary Guards (IRGC).

In Borazjan prison he was transferred to solitary confinement after 12 days of torture.

Three days later while he was quite ill and his body deeply infected because of the wounds, he was transferred to the hospital and his family was told that they could visit him in hospital in Borazjan.

To his family’s surprise, Amir was unconscious and his body was mostly infected and covered by bruises.

As Amir became conscious for a short period, he revealed some of the tortures he went through during the 15 days of torture.

He said he was beaten in his head by batons and in his stomach by a metal rod.

He said the strikes were so severe that all his intestines had been damaged. In the last moments of his life in the hospital, he asked if he could see his son. The severances of the injuries were so much that he died before having the chance to see his son for the last time.

While in prison, his parents and relatives had tried so hard to obtain a temporary release for him by providing bonds, so they could take him to the hospital, but the efforts did not have any result. Instead, he got beaten and tortured more and more in the prison.

The news of killing of defenseless Amir angered people in Genaveh who gathered the next day at his father’s house cursing Khamenei and others for Amir’s death.

This is the fourth case of killing prisoners under torture which has surfaced in recent months. Prior to Amir, Sattar Beheshti, a blogger from Robat Karim located in the vicinity of Tehran; Keramatollah Zareian, a university student in Tehran; and Jalil Savidi, a plumber from city of Ahwaz had been killed under torture.

The clerical regime in Iran is taking more tolls as the silence and inaction by the International community with regards to these atrocities continues.

The Iranian regime’s dossier on severe and systematic human rights violation in Iran should be referred to the UN Security Council and the prosecution of Iranian regime’s leader for crime against humanity is a necessary step to end the cycle of crime and repression in Iran.

Previous articleInternal feuding escalates on the 34th anniversary of the Iranian Revolution
Next articleCold-blooded murder of Iranians in Camp Liberty, Iraq