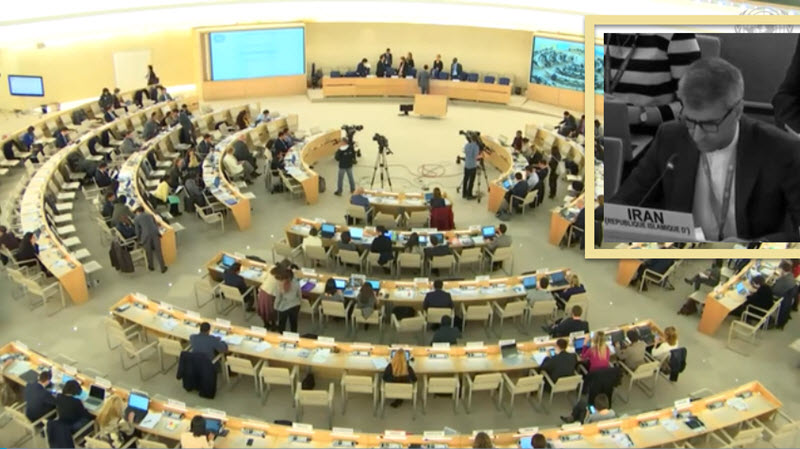 The United Nations Special Rapporteur on the situation of human rights in Iran expressed concerns on Monday before the United Nations Human Rights Council over a rise in executions under the mullahs’ regime.

However, when the mullahs’ representative in the UNHRC responded to Javaid Rehman’s address, he seemed more concerned with the role that the Iranian opposition People’s Mojahedin Organization of Iran (PMOI/MEK) played in exposing these human rights abuses.

The mullahs’ representative said: “It is very unfortunate that one of the main sources for the Special Rapporteur’s documents is the [PMOI/MEK] who have been recognized by their supporters as the opposition and human rights advocates.”

However, it is important to note that the UN has long cited Iran as the world’s leading executioner per capita and that Iran has consistently refused Rehman’s request to visit Iran and assess the situation for himself.

One of Rehman’s most pressing concerns regarding the death penalty is that children are being sentenced to death in Iran, which is a clear violation of international law and UN conventions to which Iran is a party. He explained that Iranian law allows girls as young as nine-years-old and boys of just 15 to be given the death penalty.

Rehman said: “The practice, illustrated in numerous cases reviewed, of waiting until the child offender reaches the age of 18 before execution, repeated postponements, and the inherent vulnerability of the child given his or her age, amounts to a pattern of torture and other ill-treatment”.

He advised that at least six child offenders were executed last year, while 85 remain on death row.

Rehman called on Iran to abolish the death penalty for juvenile offenders and asked that all death sentences issued against children be commuted in line with international law.

During his speech, Rehman also raised the issue of the failing Iranian economy, which is contributing to much hardship for the Iranian people, including late or unpaid wages, lack of food and water, inaccessible healthcare, rising unemployment, and falling living standards. Many Iranians have taken to the streets in protest and have been arrested for this, so Rehman called for their release.

He said: “Today, the people of Iran face a myriad of challenges. Many have voiced their concern through protests, demonstrations, and strikes. People from diverse sections of society – from truck drivers to teachers to factory workers – across the country have protested. It is in this context of increased challenges that concerns are mounting about human rights, including the rights to freedom of peaceful assembly and to association in Iran.”