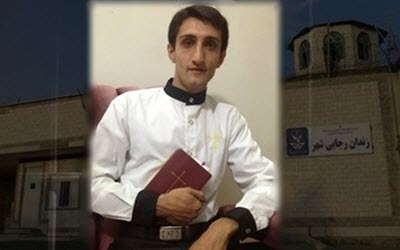 NCRI – The five years prison sentence issued by the court of first instance for the Iranian Christian convert Ebrahim Firouzi has been confirmed by the appeals court.

The so-called Revolutionary Court has convicted Firoozi of ‘forming a group in order to disrupt national security’, while human rights defenders say that Firoozi is in prison only for his beliefs.

Branch 28 of the so-called Tehran Revolutionary Court presided by Mohammad Moghiseh sentenced Ebrahim Firouzi in March 2015 to five years in prison on charges of ‘forming a group for disrupting national security’.

According to reports, Ebrahim Firouzi rejected at all stages of the judicial process having formed any group or trying to disrupt national security. Nonetheless, parts of the evidence presented at the appeals court were the same previously presented against him, according to which he was sentenced in the past.

Mr. Firoozi has been kept in Rajaeeshahr prison in Karaj since his sentence was issued last year. Now, Mansour Borji, spokesman for the Article 18 Committee, of the United Council of Iranian Churches in London (Hamgaam), tells Radiofarda that Mr. Firoozi’s sentence has been confirmed and that the Christian convert has to spend the coming years in prison.

Also according to ‘Mohabatnews’, an Iranian Christian outlet, the final verdict of the appeals court has been issued on January 14, 2017.

According to reports, Ebrahim Firouzi has also been arrested and tried once before. In 2013, the Revolutionar Court in Robat Karim, Tehran, sentenced Firoozi to one year in prison and two years of exile in the city of Sarbaz, Sistan and Baluchestan province, on charges of ‘propaganda against the Islamic Republic’, ‘forming and leading a perverted evangelical Christian group’, and ‘having links with foreign anti-revolutionary individuals and networks’, says Mohabatnews.

Previous articleSenator Torricelli in the New Year’s Celebration With the Iranian Resistance: These Proud 3,000 Are the Tip of the Spear
Next articleIran Regime Sends More Weapons for Houthi Militias in Yemen