Iran: High court approves sentence to have eye of a man gouged out, ear and nose cut off 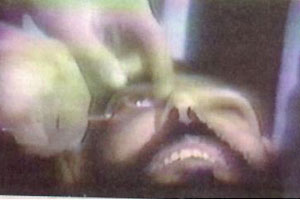 NCRI – The highest court in clerical regime ruling Iran has approved the sentence of a young man to have his eyes gouged and his right ear and nose cutoff, state-run daily Shraq reported.

The man identified by his first name Jamshid was convicted last october of deliberately pouring acid on the face of a girl named Shirin which caused her to lose eyesight and right ear.

The Iranian regime’s judiciary officials have publicly defended the cutting off of hands and feet, the removal of a “defendant’s” eye, and even stoning as very real part of their judicial law.

In the many years of never-ending and fruitless series of negotiations with the Iranian regime on the nuclear issue, the West has closed its eyes on violation of human rights in Iran and the escalating executions and savage punishments such as cutting off the hands and feet, gouging eyes, cutting off nose and ear.

The silence and inaction in face of growing oppression since Hassan Rouhani took office, regardless of any excuse, has been encouraging the regime to continue with its anti-human atrocities and punishments.

On February 19, 2014, the state-run Mehr news agency affiliated with the regime’s Ministry of Intelligence and Security (MOIS), stated that a prisoner has been condemned to the barbaric punishment of “cutting off one hand and one foot”.