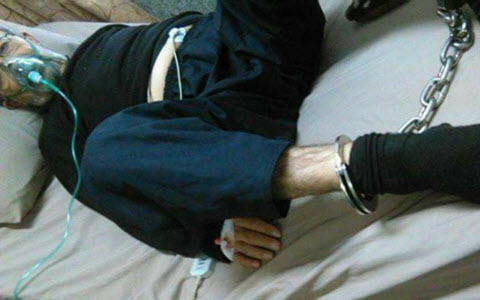 NCRI – According to reports, the Iranian regime’s judiciary and security authorities have opposed and prevented the transfer of the imprisoned labour activist Mahmoud Salehi to a well-equipped hospital.

Doctors have insisted that this labour activist should be transferred to a more accessible hospital soon due to acute cardiac, kidney and diabetes problems.

According to state-run ILNA news agency, quoting Mr. Salehi’s family, his doctor recommended that this labour activist should be transferred to a hospital in Tehran, Tabriz, or Orumiyeh for continued treatment of his heart.

He was first transferred to the prison infirmary and then to the so-called Imam Khomeini hospital (the 1000-bed hospital in Tehran) on November 12 due to exacerbation of his heart disease, and has since been admitted to the intensive care unit.

Mahmoud Salehi’s family expressed grave concerns over his physical condition on Tuesday November 7. Samrand Salehi, son of Mahmoud Salehi, also told Radio Farda earlier that his father has undergone cardiac surgery twice this year. He pointed out that his father’s kidneys should be dialysed two days a week, and at the same time he has diabetes.

Mahmoud Salehi was arrested by the Ministry of Intelligence on October 29 after dialysis of his kidneys and transferred to the Central Prison of Saqez to serve one-year prison term.

Mr. Salehi has previously officially announced on his Facebook page that he has lost his kidneys in the detention center of Sanandaj Intelligence Office in 2015.

Meanwhile, the committee in defense of Mahmoud Salehi announced on November 8th that his physical condition was deteriorating and wrote: “According to the physician, Mr. Salehi’s heart is very weak and his pumping power is much lower than the normal amount and should be transferred to a hospital in Tehran, Tabriz, or Orumiyeh.”

The committee, spokesperson, Najiba Salehi, wife of Mahmoud Salehi, said that disregard for this request and returning Mr. Salehi to prison, or putting pressure on him for any excuse, “has no meaning but a death sentence for him.”

Earlier, a photo of Mohamoud Salehi in hospital was published showing that his feet were chained while in bed.

Meanwhile, Amnesty International, the International Confederation of Trade Unions and several independent labour organizations in Iran, while criticizing this behavior with Mahmoud Salehi, demanded his immediate and unconditional release and other imprisoned labour and trade union activists.