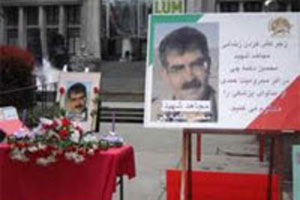 NCRI – Friends and family of political prisoner honored the memory of Mohsen Dokmechi, a well-known Tehran Bazaar merchant and supporter of the main Iranian opposition movement, who died in prison three years ago due to deliberate denial of access to medical care by the Iranian regime.

Mr. Mohsen Dokmechi, 53, a supporter of the People’s Mojahedin Organization of Iran (PMOI/MEK), had served several years in prison in the 80s and was one of the most famous and reputable merchants of Tehran Bazaar. After his last arrest, he was sentenced to 10 years imprisonment and exile in August 2009 on the charge of assisting the families of political prisoners and having a daughter in Camp Ashraf.

After being diagnosed with cancer, the Iranian regime’s henchmen prevented his treatment for months. Finally, after several months of delay, they hospitalized him while his hands and feet were enchained and three armed agents from the mullahs’ intelligence service guarded him in the hospital.

Following major surgery, doctors mentioned in a letter to the regime’s prosecutor that the patient needed chemotherapy and special medical care because of the long delay in his surgery. However, the regime neglected the doctors’ recommendations and took him back to prison right after his surgery.

Despite severe pain and the physicians’ recommendations, the regime’s agents held Mohsen Dokmechi in ward 4 of Gohardasht prison under intolerable conditions.

In order to torture him to death they did not even give him painkillers. Finally he died following nine months of imprisonment and torture.

Despite the fact that international human rights organizations have raised the alarm, on numerous occasions, about the deliberate denial of medical care to sick political prisoners in Iran – leading to their deaths – the Iranian regime continues this inhumane torture.

Every year friends and family of Mr. Dokmechi honor his memory by laying wreaths on his burial site, not only to respect his devotion to the cause of freedom and democracy, but also to continue to protest the torturing of political prisoners in Iran by denying them timely access to medical care.