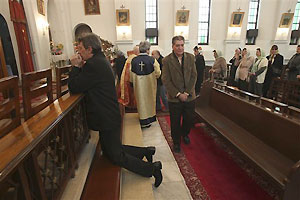 According to reports received from Iran, plainclothes agents have attacked a gathering of a group of Christians in Fardis of Karaj, arresting four of them in the last week of December. The four Christians have been transferred to an unknown location.

The Iranian regime has closed down churches, including Petros Church in Tehran, to Farsi speaking Christians and increased pressures against them.

Many of these Christians have been members of these churches for more than 20 years and now they are forbidden to enter the churches.

During the past years, the Iranian regime has intensified repression including imprisonment, pressure and threats against Christians.

Based on published reports, Iran under mullahs is among the 10 most countries suppressing Christians.