NCRI – A delegation of the National Council of Resistance of Iran (NCRI) earlier this week addressed a major international annual human rights conference in the Italian Senate. 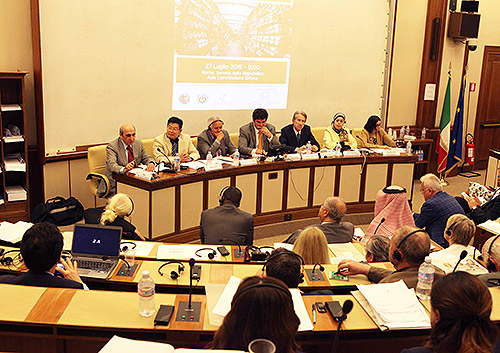 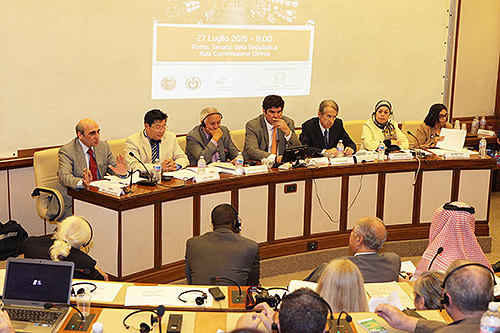 The participants of the day-long conference included Italian legislators, ambassadors, diplomats, analysts and staff of think tanks, human rights and women’s rights activists as well as guests from the Middle East, North Africa, and the Far East.

“The threat of Islamic extremism and terrorism that emanates from the Middle East has become as pervasive and as pressing as ever. The theocracy ruling Iran is not only direct and massively involved in all three wars in the region; it acts as the main fomenter of Islamic extremism and terrorism,” Mr. Shahin Gobadi, member of the NCRI’s Foreign Affairs Committee, told the conference.

“Suppression at home, transgression in the region, and the drive to acquire nuclear weapons have been the pillars of survival of the clerical regime, the main source of instability in the region for the past three decades,” he said.

“Although the nuclear deal on July 14 offered many unjustifiable concessions to the regime, it nonetheless forced the regime’s Supreme Leader Ali Khamenei to retreat and violate the red lines he had repeatedly underscored over the past 12 years. Caught in a deadlock where he had to choose between bad and worse, Khamenei chose the bad option with all its consequences and caved in to accept the deal which was a colossal defeat of the regime’s quarter-century drive to acquire the nuclear weapon.” 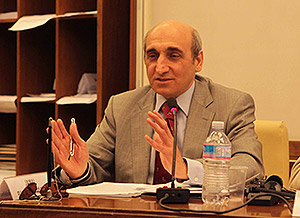 “Iran holds the record of having the most executions per capita in the world, and is the biggest executioner of juvenile offenders,” he said.

“Just last week Amnesty International provided a shocking report. It said nearly 700 were put to death in Iran by the regime in just over six months. This is equivalent to executing more than three people per day. At this shocking pace, Iran is set to surpass the total number of executions in the country recorded by Amnesty International for the whole of last year. According to the Amnesty, ‘If Iran’s authorities maintain this horrifying execution rate we are likely to see more than 1,000 state-sanctioned deaths by the year’s end.’”

Mr. Gobadi highlighted the notorious 1988 prison massacre in Iran which has gone unpunished to this day.

“In the summer of 1988, exactly this time of the year, 30,000 political prisoners, primarily members and activists of the People’s Mojaheidn Organization of Iran (PMOI/MEK) were massacred in a matter of a few months. Ironically, Mostafa Pourmohammadi, one of the three people who sat on the ‘death commission’ that sent these political prisoners to the gallows, is Hassan Rouhani’s Minister of Justice today.”

“So as some European dignitaries such as Ms. Federica Mogherini, High Representative of the European Union for Foreign Affairs and Security Policy, are planning to visit Iran in the immediate future, they should keep in mind that their meetings with leaders of the ruling religious fascism will encourage this regime to continue torture and executions. They will be meeting in Tehran with those bearing chief responsibility for the export of terrorism and fundamentalism and the massacre of the innocent peoples of Iraq, Syria, Yemen and Lebanon.”

“So let’s make no mistake. The clerical regime is at its lowest point, and following the nuclear agreement its crises will only exacerbate. But as long as this regime is in power it will act as the main source of regional instability, terror and export of Islamic extremism,” Mr. Gobadi stressed.

“But the other reality is that there is a viable alternative against the regime, with pervasive grassroots support inside and outside of Iran. The National Council of Resistance of Iran, led by Mrs. Maryam Rajavi, poses a viable alternative to the clerical regime. This was once again evident in the major gathering of the Iranian Resistance in Paris in June attended by more than 100,000 people and 600 dignitaries from more than 70 countries.”

“The NCRI is a coalition of some 500 Iranian opposition groups and personalities, committed to a democratic, secular and non-nuclear republic in Iran. Half of the NCRI’s members are women. As a Parliament-in-exile, the Council’s primary task is to hold free and fair elections for a Legislative and National Constituent Assembly in Iran no more than six months after the ouster of the ruling theocracy.”

“According to Mrs. Rajavi’s 10-point plan for the future of Iran, the ballot box is the only criterion for legitimacy. Accordingly, we seek a republic based on universal suffrage.”

“The Iranian Resistance seeks a pluralist system, freedom of parties and assembly. It respects all individual freedoms. We underscore complete freedom of expression and of the media and unconditional access by all to the internet. The NCRI supports and is committed to the abolition of the death penalty. We are committed to the separation of Religion and State. Any form of discrimination against the followers of any religion and denomination will be prohibited. We are committed to the Universal Declaration of Human Rights. We seek a non-nuclear Iran, free of weapons of mass destruction.”

“The future of the Middle East will not be written by the mullahs, rather by the Iranian people and their organized Resistance,” he summed up.