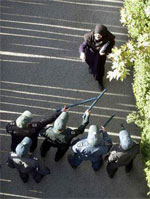 Jomhury Eslami, state-run daily, quoted him saying: "The Guidance Patrols to enforce chastity regulations in the Greater Tehran are permanently stationed in 20 locations. The force consisting of 200 in 50 mobile teams using Mercedes Benz cars have already started their activities."

Giving a record of their suppressive operations this year, talaie said: "32,100 women and 5,064 men have received warnings this year (Iranian year started on March 21)."

He added: "Since enforcement of the new plan, 119 women and 45 men have been arrested on streets."

Previous articleIran: New suppressive force deployed in Tehran
Next articleDemonstrations erupt in other cities of Azerbaijan and Ardabil provinces