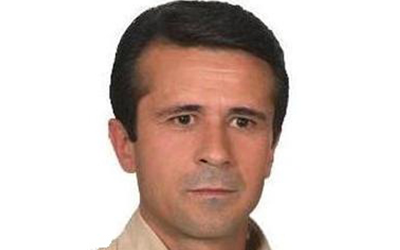 NCRI – Iranian workers’ rights activist and political prisoner Jafar Azimzadeh is on Day 26 of an indefinite hunger strike in Tehran’s notorious Evin Prison against the regime’s clampdown on union activities in Iran.

Mr. Azimzadeh’s health is reported to have deteriorated significantly and he is under pressure by the mullahs’ regime to end his protest.

On Saturday Mr. Azimzadeh was temporarily taken to hospital after complaining of kidney problems. He refused to be administratored liquid serum and was transferred back to prison in his current state after midnight.

His wife has said that Mr. Azimzadeh has lost considerable weight, his blood pressure has dropped, and he is suffering from loss of vision and serious kidney pain.

The Tehran bus drivers’ union, the Syndicate of Workers of Tehran and Suburbs Bus Company (Sherkat-e Vahed), in a statement this week warned about the deterioration of Mr. Azimzadeh’s health and called for his release from prison.

The Tehran prosecutor’s office on May 17 demanded that he end his hunger strike. On May 17 he had to be transferred by car to the visitor’s hall to see his wife as he was unable to walk after becoming frail due to his hunger strike.

According to reports, officials from the Tehran prosecutor’s office have suggested to Mr. Azimzadeh that he would be given an opportunity to take long-term leave from prison if he breaks his hunger strike.

Reports say that Mr. Azimzadeh replied to the representative of the Tehran prosecutor’s office: “I did not go on hunger strike in order to be permitted to have prison leave. In the letter that I had written prior to beginning my hunger strike, I set out my demands clearly, and I expect them to be fulfilled. The first step to fulfilling these demands is to halt the implementation of the [current] verdicts and reevaluate our file rejecting the accusation of acting against national security. I will therefore continue with my indefinite hunger strike.”

Mr. Azimzadeh, who was arrested last November, is currently serving a six-year prison sentence for engaging in peaceful and legitimate trade union activities.

Mr. Azimzadeh last week protested his detention in Evin Prison while the mullahs’ kangaroo court in Saveh, south-west of Tehran, considers his case. He has demanded that he be allowed to properly defend himself in the court.

The following is the text of the statement by Jafar Azimzadeh:

My dear friend and resistant cellmate Ismail Abdi was released on three 3 billion Rials bail (U.S. $100,000). He had spent 11 months in prison without a judicial verdict and solely based on the will of the security apparatus. Abdi’s release, while exciting and gratifying, does not mean that even a small step was being taken to realize our demands and the demands of millions of teachers and workers.

In our joint statement that was strongly and passionately supported by the country’s teachers and workers unions as well as labor and teachers’ organizations across the world, we demanded an end to treating social and civil protests as security issues and removing the charge of “associating and colluding with intent to act against national security” from the open files of protesting workers and teachers and imprisoned union activists, including ourselves.

We protested wages below the poverty line, the ban on holding independent and free celebrations to mark International Workers’ Day and Teachers’ Day, the ban on forming independent trade unions, and lack of transparency and effective action by the International Labor Organization (ILO) against flagrant violation of the essential rights of Iranian workers and teachers, and we did go on hunger strike.

Accordingly, as far as it concerns Ismail Abdi’s release through a heavy bail and an open case with heavy security charges, such an act from the legal authority dealing with his case even within the framework of existing law-breaking actions, was routine and, in Ismail’s case, predictable.

For that reason, his release can’t be used as a claim of addressing our demands and that of millions of workers and teachers, and it appears that it was intended to overshadow and limit the scope of the ever increasing (labor and teachers) movement that has centered around ending the treatment of protests by teachers and workers as security issues and protesting heavy security charges against trade activists around the country and around the globe.

Therefore, with great appreciation for the support of Iran’s teachers and workers and labor and workers’ unions and organizations around the world for our demands in the joint statement with Ismail Abdi, and emphasizing on realization of all of them, I will continue my indefinite hunger strike that I began on April 30.