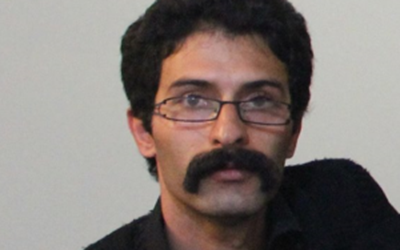 NCRI – A group of political prisoners in Hall 12 of Gohardasht Prison in Karaj have sent a message to support the political prisoner Saeed Shirzad who has been on hunger strike after sewing his lips since December 7 to protest mistreatment and violation of prisoners’ rights by the authorities and to demand his rights. The following is their message:

The political prisoner, Saeed Shirzad, sewed his lips and staged an indefinite hunger strike on December 7 to achieve his legitimate demands. He suffered from severe weakness several times this week, but was never dispatched to a hospital and refused to be admitted in Gohardasht prison infirmary to receive serum.

Saeed Shirzad continuing his hunger strike said: “We have experienced this several times. Previously, Ahmad Ramazan, who is from Syria, has been harassed and beaten by prison officials while he was on hunger strike and consequently fell in coma for several days. Last week, political prisoner Behnam Mousivand who is also on hunger strike was summoned upon the order of the prison management. However, he was taken by wheelchair to the warden’s office because he was extremely weak and had very low blood pressure. But with ultimate regret, because he was on hunger strike, he was severely beaten and tortured and threatened. Now, the executioners, how can I trust you? I prefer to die in Ward 12 but I will not give my body to you coward villains. I will not end my hunger strike until I achieve my demands.”

We, political prisoners in Hall 12 of Gohardasht prison in Karaj, call on all freedom-loving people and human rights defenders and activists to help this political prisoner. Saeed Shirzad is currently in critical health condition.

Previous articleIran: City Officials Beat Grave-Sleepers out of Cemetery
Next articleFormer Official: Hezbollah Is Iran Regime’s Police in the Region