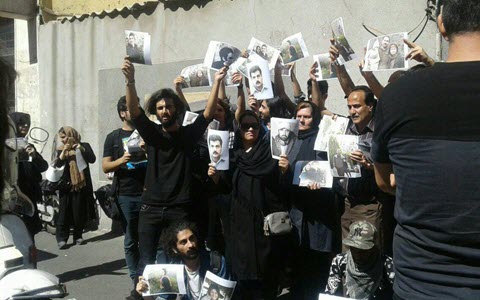 NCRI – Monday morning, October 2, a protest gathering was staged in front of the Iranian regime’s parliament in response to a call by the mother of Soheil Arabi, a political prisoner who is on dry hunger strike in Evin Prison.

“Our dear friend, Soheil Arabi, has been on hunger strike for several days because his legal and legitimate demands are not fulfilled and everyone knows that hunger strike is very dangerous.”

Soheil Arabi’s mother thanked all the people who participated in the gathering on behalf of her son and said that her mood is changed.

According to reports, an intelligence official in a meeting with Soheil Arabi September 30 asked him to end his strike for the expediency of the regime. The official went to visit Soheil Arabi in ward 7 of Evin prison and said to him that “it would be costly for the system” if he died during the holy month of Muharram.