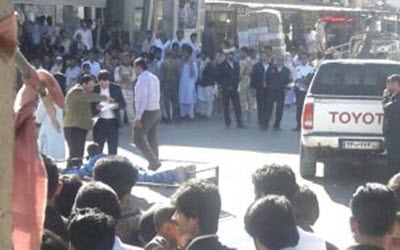 NCRI – According to eyewitnesses, on December 28th, flogging punishment of a young man charged with theft, and whose identity is unrevealed, has been carried out in public in the city of Iranshahr – South Eastern Iran.

It is worth noting that the United Nations earlier had announced that flogging in Iran is inhumane, cruel, degrading and contrary to international law.

The United Nations says that in international human rights law, in particular the Convention against Torture, flogging punishment is prohibited and could be considered an act of torture.

Previous articleIran: The Commander Who Repressed the Protests Was Promoted!
Next articleIran: City Officials Beat Grave-Sleepers out of Cemetery