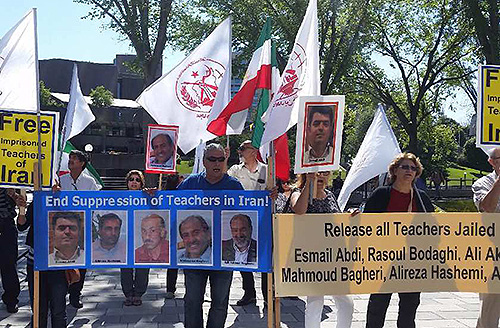 NCRI– A deputy in regime’s Ministry of Education admitted to holding over 1,000 teachers in prison.

Surely the number of imprisoned teachers exceeds this number and regime’s officials are providing smaller figures for the horrendous number of hardworking and noble educators in detention due to the extensive protests by country’s educators.

The Deputy Minister of Education absurdly attempted to allege that these one thousand teachers are in prison because they have not paid up their loans or are broke. However, this alone, is enough reason for the infamy of regime’s leaders who are plunderers as it shows that the educators who are to bring up the new generation and who are responsible for advancing culture and knowledge that would in turn diminish crimes in the society are themselves poor and living under the poverty line. They have failed in providing the minimum livelihood for their families and have ended up in prisons of this corrupt and criminal regime.

But what have compelled regime’s officials to acknowledge they are keeping one thousand teachers in prison are the escalating protests of the educators. The gathering of teachers, before all else, aims at securing the release of their imprisoned colleagues. Any protest by teachers against the suppression and crackdown, much like their protests against their deplorable living conditions caused by living on under the poverty line wages, will be met by charging them with “propaganda against the system” and “activity against the national security”. This will be followed by prison sentences and torture in the prisons of this antihuman regime. This is the reality that the Ministry of Education, in collaboration with the Prisons Organization that is tasked to detain, torture and suffocate any opposition voice, are trying to cover up.

Following widespread and nationwide protests of teachers in May 2015, Mr. Esmail Abdi, General Secretary of the Teachers Association, was threatened by regime’s intelligence ministry that if the protests continue, he would be arrested. Since the protests continued, regime’s intelligence agents arrested Mr. Abdi on June 27, 2015 as he was leaving the country to participate in the Canada International Conference on Education (CICE). He was imprisoned and even his lawyer was not permitted to meet him..

Mr. Rasoul Bodaqi that was arrested in 2009 and condemned to six years in prison has not been released although his sentence was over on August 6, 2015. The intelligence ministry brought up fresh fabricated charges against him to bar his release. Messrs Aliakbar Baghbani, Mahmoud Baqeri, Alireza Hashemi, Abdolreza Qanbari and many other imprisoned teachers are just guilty of trying to restore the rights of educators and protesting against oppression and injustice. So far, the protesting educators have been sentenced to prison, exile, prohibition to teach, reduction of wages, etc.

While astronomical thievery by regime’s leaders and officials is a subject of constant infighting of regime’s factions and the poverty line stands at 3.7 million toman, teachers’ wages is merely one million toman.

In their assemblies and protest gatherings, including the one on July 22 in front of regime’s parliament, teachers were carrying placards that read: “No to prison, no to threat, no to getting fired; imprisoned teacher must be freed”, “teacher does not belong in prison”, “teacher’s security should be provided”, “honor, livelihood are our undeniable rights”, “bread, dwelling, honor”, “teacher’s future must be provided for”, “political prisoner must be freed”, “effective insurance is our undeniable right”, “we want wages above poverty line”, “Mr. Rouhani doubt your justice!”, “hungry till when?”, “social and economical humiliation of teacher until when?”, “our wage is in no way proportional to the back-breaking inflation”, “we demand removal of prejudice at various levels of education”, “teacher is vigilant and hates prejudice” and “teacher will die, but will not accept prejudice”.

Ms. Soheila Sadeq, Chair of the Education Committee of National Council of Resistance of Iran, urged international institutions defending the rights of teachers and educators to take action and demand the immediate release of all oppressed and caring teachers that have been deprived of attending their classes and are imprisoned because of the religious despotism that rules Iran.

Education Committee of the National Council of Resistance of Iran
August 14, 2015

Over 200 teachers from across Iran arrested in Tehran protest

Teachers protest across Iran despite Khamenei’s threats and oppressive provisions