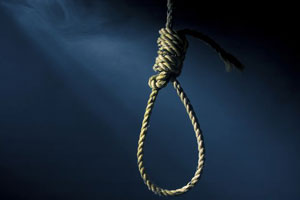 NCRI – Iran’s fundamentalist regime on Saturday hanged three political prisoners in a prison in the south-eastern province of Sistan and Baluchistan.

Abdolqani Gangozei, 29, and two other unnamed political prisoners were hanged at dawn on Saturday in Zahedan Prison.

Gangozei had spent the past eight years in the regime’s notorious prisons.

On Thursday he was transferred from Ward 5 of Zahedan Prison to solitary confinement in preparation for his execution.

Other prisoners had reported that Gangozei had been told by the regime’s local judiciary officials that he would soon be released from prison, but following a series of skirmishes in the region in recent days which led to the death of a number of the regime’s suppressive security forces, the mullahs’ regime executed him in an act of vengeance.
Gangozei was an active opponent of the regime and routinely smuggled out news about the regime’s crimes in Zahedan Prison. He also signed numerous statements by political prisoners condemning the regime’s atrocities inside Iran and abroad.