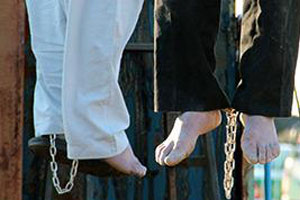 NCRI – Three prisoners were hanged in Gohardasht (Rajai-Shahr) Prison in Karaj, north-west of the Iranian capital, on Wednesday.

At least seven other death-row prisoners who were transferred to solitary confinement in Gohardasht on Sunday are at imminent risk of execution.

Previous articleIran regime fails once again to cover up Soleimani’s serious injuries
Next articleIran, the Islamic State, and the Perversion of Islam