Iran regime is one of the world’s last executioners of minors: Amnesty International 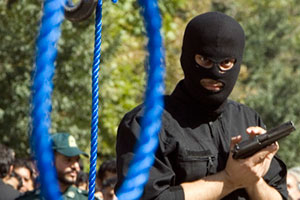 Iran under the rule of the clerical regime is one of the leading executioners of juvenile offenders, Amnesty International said Monday.

In a new report, Amnesty International said that it had documented the execution of at least 73 juveniles in Iran from 2005 to 2015 and that 160 juvenile offenders are languishing on the country’s death row.

The report said that Iranian regime had made changes to the law ncluding new discretion by judges to impose alternative punishments on juveniles convicted of capital crimes, however, in reality, the report said, these changes are attempts by the authorities to “whitewash their continuing violations of children’s rights and deflect criticism of their appalling record as one of the world’s last executioners of juvenile offenders.”

According to the Amnesty International, the report was based on information received from death-penalty opponents and human rights defenders in Iran, as well as from lawyers and relatives of juveniles convicted of capital crimes in Iran.
Now that Iran is emerging from an era of international sanctions and is seeking broader acceptance, Ms. Auerbach said, rights groups are hoping that the Iranian authorities “realize they have to act in accordance with international human rights standards.”

There have been over 2,000 executions in Iran in the two years that Hassan Rouhani has been in office, more than in any similar period in the past 25 years.

The victims include political dissidents like Gholamreza Khosravi, an activist of Iran’s principal opposition, the People’s Mojahedin Organization of Iran (PMOI or MEK) who was hanged solely for providing financial assistance to a satellite television station supporting the opposition.

On April 20, 2014 Rouhani described these executions as “God’s commandments” and “laws of the parliament that belongs to the people.”

Previous article
Saeed Abedini says he was tortured in Tehran’s Evin prison
Next article
“THE SMILING FACE OF THE MULLAHS”: HOC report on the Death Penalty in Iran