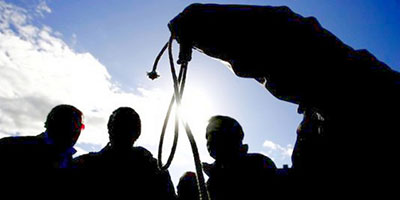 NCRI – Iran’s fundamentalist regime mass executed on Wednesday 11 prisoners in their twenties, including at least one who is believed to have been a minor at the time of his alleged offence. Another three prisoners were executed on Tuesday.

The 11 victims, all aged between 22 and 25, were hanged en masse at dawn on May 25 in the notorious Gohardasht (Rajai-Shahr) Prison in Karaj, north-west of Tehran.

Among them was Mehdi Rajai who is believed to have been 16 years old at the time of his alleged crime.

The names of eight of the other prisoners are believed to be Mohsen Agha-Mohammadi, Asghar Azizi, Farhad Bakhshayesh, Iman Fatemi-Pour, Javad Khorsandi, Hossein Mohammadi, Masoud Raghadi, and Khosrow Robat-Dasti.

On Tuesday, May 24, three other prisoners in Karaj’s Qezelhesar Prison were hanged. One of them was identified as Ruhollah Roshangar, a married father of two. All three had been behind bars for the past four years.

Also on Wednesday, the mullahs’ regime informed seven Sunni prisoners in Gohardasht that their execution sentences have been handed down by Branch 28 of the regime’s ‘Revolutionary Court.’

The seven prisoners were identified as Davoud Abdollahi, Qasem Abesteh, Khosrow Besharat, Ayoub Karimi, Anvar Khezri, Farhad Salimi, and Kamran Shikheh. All seven have been behind bars since December 7, 2009.

The latest hangings bring to at least 112 the number of people executed in Iran since April 10. Three of those executed were women and two are believed to have been juvenile offenders.