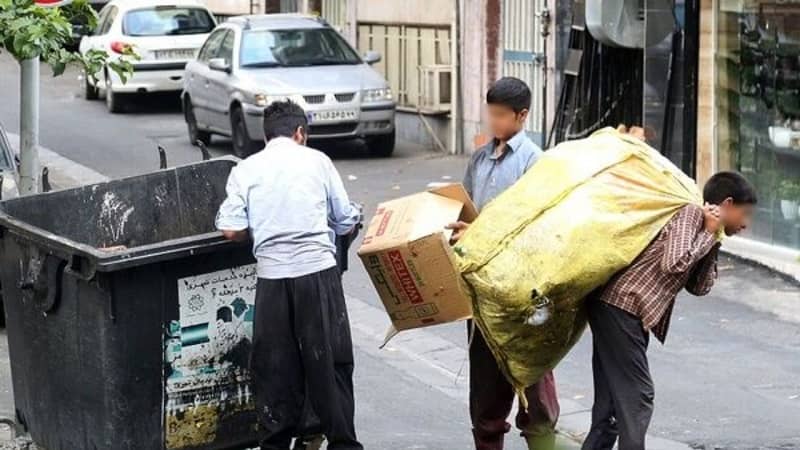 Despite Iran’s natural wealth, Iranians grapple with poverty due to the regime’s inhumane policies. Every day disturbing news comes from Iran of how poverty forces people to harm themselves or sell their body parts.

On Monday, Mohammad, a 14-year-old boy in Mahshahr, southwest Iran, committed suicide. Mohammad was his family’s breadwinner and had quit school to help his elderly parents.

He worked as a street paddler, selling purified water to people on a bicycle one of his relatives had given him. Due to the coronavirus outbreak, no one accepted to purchase water from Mohammad.

Mahshahr is among Iran’s richest cities in terms of natural resources such as gas and oil. Some of the major ports in Iran are located in Mahshahr, such Khomeini Port. Yet, locals in Mahshahr are living in terrible conditions.

Mohammad Fazeli, 14, hanged himself Sunday in his home in Mahshah, SW #Iran.
He was a child laborer & had to quit school last year to work.
Rampant poverty has led to tragic suicides while the regime plunders the people's wealth & use it for suppression & export of terrorism. pic.twitter.com/xy58k3d3Ur

When the regime’s Vice-President Eshagh Jahangiri visited Mahshahr on Sunday, people protested his presence and shouted at him, displaying their anger at the regime’s mismanagement and inhumane policies which have brough nothing but misery for Iranians.

In this regard, the state-run Vatan-e Emrooz daily on Sunday acknowledged that “people’s protests when they meet officials have become a habit.”

In a similar development, a heartbreaking video circulating on social media on Sunday showed a 10-year-old boy speaking to a citizen journalist, saying he is his family’s breadwinner and working as a garbage collector.

He says: “I earn 15,000 tomans a day [less than a dollar, with the current free market exchange rate] by scavenging garbage to feed our family of six, because my parents are unable to work. I buy a bread, and we eat it with tea.”

Heartbreaking video of a 10-year-old Iranian child laborer who makes less than a dollar a day but has to pay for his household. He wants to be a laborer when he grows up.
Watch.
(Has English Subs.) pic.twitter.com/n0FX949aSh

Last year in July, “an NGO conducted a survey to identify all garbage collector children and announced accurate statistics in this regard. Some 4,600 garbage collector children were identified in Tehran according to this survey,” Mahmoud Abbasi, the regime’s deputy minister of justice for human rights, said in an interview with regime’s official ILNA news agency on November 1.

Another shocking video from Iran shows a man who has put his heart for sell. He says: “What can I do? I have to feed my children.”

A father has put up an ad to sell his heart. Listen to the conversation between the father & a man who can't believe he would sell his heart from poverty. #Iran's regime turns 42 in a few more days. We would like to congratulate them on their "achievements". #42YearsOfMisery pic.twitter.com/gFCSdp07ta

In other words, due to extreme poverty, he is literally trading his life for bread. In September 2019, the National Council of Resistance of Iran (NCRI) published an exclusive report about the sale of body parts in Iran.

“As the economy is falling apart, a lucrative business is on the rise in Iran: selling bodily organs. It might be the most unique trade in the world. In recent years, rising living costs and poverty have greatly contributed to the booming business. It has become a systemic problem throughout the country. Kidneys are most in-demand, but a business that started more than a decade ago is no longer limited to the kidney but includes liver, bone marrow, and cornea. The liver is the second most frequently traded organ. Blood plasma is the latest addition to the list,” read the NCRI’s report in part.

The NCRI report added that many people act like brokers on the internet for selling organs. According to the NCRI, “In addition to functioning through the Internet, brokers often wander around major hospitals and approach relatives of patients who need a transplant in order to assess their financial status and make an offer an offer. Brokers often take a 50 percent commission on resulting sales.”

One of the cases of selling body parts is the one of a “computer science Ph.D. student [who had] offered his kidneys for sale on July 23, 2019, by posting a written text at the bus stop. He wrote that he was doing so because he was unable to afford the cost of care for his disabled mother and had no money for rent and education.”

While the regime’s officials and apologists have tried to blame international sanctions for these tragedies in Iran, the NCRI’s study underlines that “the painful trend of selling body parts continued and even intensified following the signing of the Iran Nuclear Deal (the Joint Comprehensive Plan of Action, JCPOA), which released more than $100 billion and enabled the regime to sell more than two million barrels of oil on a daily basis.”

As the state-run Arman daily on January 27 acknowledged “The root of Iran’s economic problems lies more in domestic politics than in international ones. There is a center of economic corruption in the country, [which is Iran’s] real economic problem.”

These tragic incidents will continue to grow under the mullahs’ regime, because the regime will certainly continue wasting national wealth on terrorism or its other malign activities. The recent production of missiles and drones, plus the regime’s race toward obtaining a nuclear bomb, are all clear examples of how the regime wastes Iranian people’s wealth to continue its illicit activities.

The regime’s economic mismanagement will have negative consequences for the mullahs and will add to the society’s restiveness. In this regard, the state-run Vatan-e Emrooz daily on Sunday warned the officials: “Certainly, the point that we should not ignore is the accumulation of anger that has arisen among the people, especially in deprived and remote areas. There have been several examples in recent months that should be taken seriously as warnings.”

Now, the regime should await the day of reckoning when people, as the state-run Mostaghel daily wrote on January 27, “get fed up and come for” the regime’s officials.

Previous articleIran: Why Did Tehran Risk Carrying Out a Terrorist Act in Europe by Its Diplomat?
Next articleAssadollah Assadi’s Verdict Could Serve as a Turning Point in Iran-EU Relations