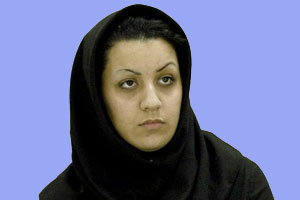 The Iranian regime’s henchman hanged Reyhaneh Jabbari after being sentenced to death for stabbing an agent of the regime’s intelligence that tried to sexually abuse her.

Ms. Reyhaneh Jabbari, a decorator, was in prison for the past seven and a half years.

In a deceptive scheme, Morteza Abdulali Sarbandi, an agent of the Iranian regime’s notorious Ministry of Intelligence and Security (MOIS) intended to abuse her. Reyhaneh was forced into defending herself by stabbing the agent.

The henchmen of the clerical regime placed Reyhaneh under savage tortures to extract forced confession.

Reyahneh’s mother, Ms. Sholeh Pakravan was informed late on Friday that her daugther might be executed. She met with her dauther  for one hour. Authorities at the prison refused to give any information to Reyhaneh’s family about where she would be transferred for execution.

Finally, early morning on Saturday Reyhaneh was hanged as a nearly one hundred people including her mother and family friends were gathered outside Gohardasht prison in the city of Karaj.

Iran: Text of Reyhaneh Jabbari’s will in a voice message to her mother