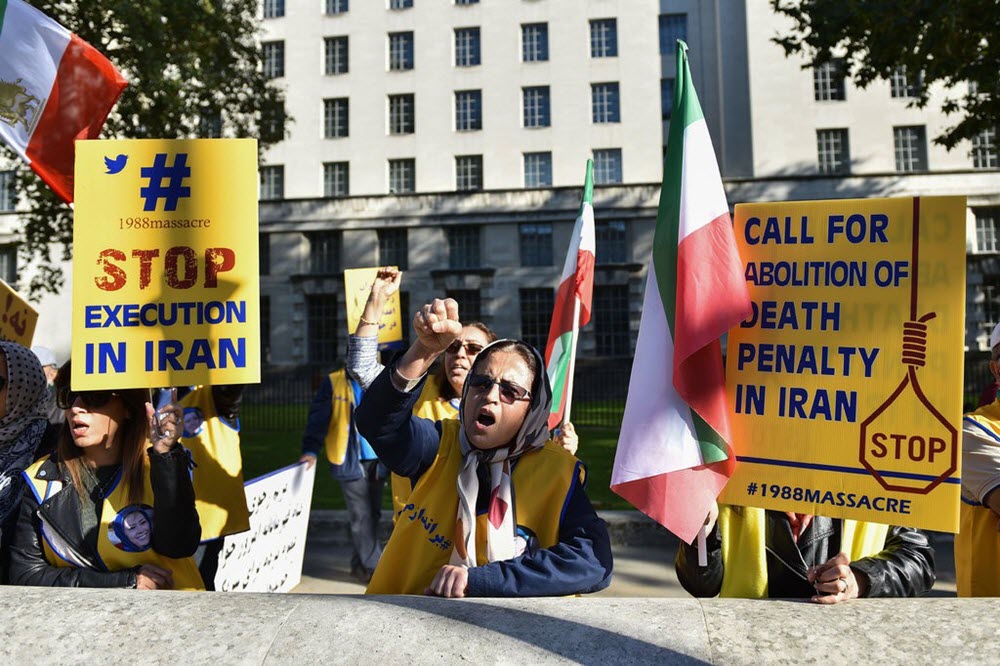 Tehran’s Revolutionary Court on Sunday sentenced four men affiliated with the People’s Mojahedin Organization of Iran (PMOI or Mujahedin-e Khalq, MEK) to prison and or death.

Branch 28 of Tehran’s Revolutionary Court headed by notorious judge, Mohammad Moghiseh, sentenced 34-year-old Abdullah Ghasempour to death and eight years behind bars on charges including “waging war on God,” “assembly and collusion,” and “membership in the MEK.”

The court said that Abdullah Ghasempour had set fire to a paramilitary Bassij base, filmed the event and sent it to the MEK media. The Bassij is affiliated to the regime’s Islamic Revolutionary Guards Corps (IRGC), which was designated a foreign terrorist organization by the U.S. State Department last month.

Three other men, Mohammad Hossein Ghasempour (Abdullah’s brother), 32, Alireza Habibian, 30, and Akbar Dalir, 34, were sentenced to five-and-a-half years in prison each for “assembly and collusion.”
The trio are currently held in Ward 4 of Tehran’s Evin Prison.

All four had been arrested on May 21, 2018, in Tehran and were transferred to the notorious Evin Prison. They were kept in a state of limbo for nearly a year before being tried.

The National Council of Resistance of Iran in a statement on May 17, 2019 announced the names of 11 political prisoners arrested in the past month.

The NCRI said: “The transfer of Hash al-Shabi forces from Iraq to the flood-hit areas, launching night patrols and “neighborhood-based security patrols”, called the Razavioun, and the new wave of arrests throughout the country, especially among the supporters of the MEK, are part of the repressive measures of religious fascism to prevent popular uprisings. “

This comes after the Iranian regime’s intelligence officials announced that dozens of the PMOI (MEK) supporters were arrested last year.

On April 19, Intelligence Minister Mahmoud Alavi reported the arrests of 116 teams associated to the MEK in the past year.

Subsequently, the Director General of the intelligence ministry in East Azerbaijan Province on April 24, 2019, announced that there had been 110 arrests and encounters with the Mojahedin in the province in 2018.

The NCRI, however, said that the actual number of arrests is much higher, with the IRGC, IRGC intelligence directorate, law enforcement, and prosecutors, carried out separate arrests.

The names of 29 detainees announced by the MEK are as follows: