Iran: The Political Prisoners in Other Prisons Join the Hunger Strike in Solidarity 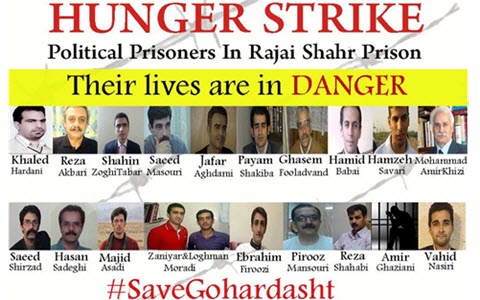 NCRI – A group of political prisoners of Ardabil Prison, Northwestern Iran, in a letter to the Special Rapporteur on Human Rights in Iran and the UN High Commissioner for Human Rights expressed their support and sympathy with the prisoners on hunger strike in Gohardasht prison located in Karaj, West of the capital Tehran, urging the authorities to address their issues including the prison’s poor condition.

According to the latest reports from sources close to the prisoners, more than 20 political prisoners on strike have been constantly continued their protest for 25 days so that their demands to be addressed. The health condition of prisoners on strike is deteriorating. The doctors are not allowed to enter the wards for medical examinations and no prisoner is transferred to the healthcare facility as well.

The letter of political prisoners of Ardabil Prison reads,

We call on you and the international authorities to address the demands of these prisoners as well as the other political prisoners who have been experiencing the similar situation in the country. We also ask you to send a request to visit the prisons and talk to the political prisoners in Iran.

The political prisoners of Gohardasht Prison suffer from serious health conditions after 25 days of strike. There are old people among them that suffer from heart disease, diabetes, and various diseases. They have been infected during their time of captivity.

We the political prisoners, as well as the Iranian people, demand that the situation of prisoners on strike to be addressed as soon as possible and therefore, they will be able to return to their previous place.

The will of all Iranians is the release of political prisoners and the halt of executions in Iran.

Many Thanks,
The political prisoners on exile, Ardabil Central Prison
August 23, 2017″