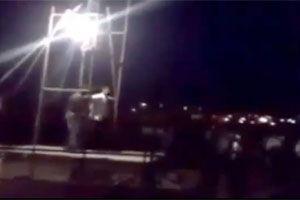 NCRI – The Wednesday’s public hanging of a young prisoners in city of Karaj moments after being beaten by hangmen for demanding to see his mother, has created much anger in the public that the Iranian regime’s officials are worried about its widespread backlash.

The state-run Mehr news agency reported on Sunday that “the footage widely distributed on the internet has changed the atmosphere for the benefit of those who had been condemned” to death for crimes.

“Following the hanging, expression of anger by social network users went so far that some claimed those executed had been innocent and even some unknown reason were given that the prisoners are had been victims themselves,” the reports added.

“The footage of the hanging and the prisoners efforts to see his mother was produced by using a cellphone and immediately was distributed on the Internet. Therefore those who were not present at the scene watched it.”

The prisoner, indentified by his first name Habib, was one of the three prisoners simultaneously hanged in three separate location in public in Karaj.

A footage of public hanging of Habib was widely distributed on the Internet showed the hangmen beating up the prisoner for asking to see his mother for the last time before being killed.