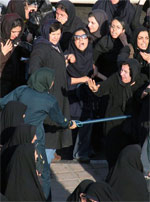 The injured woman was taken to a hospital with wounds to her face and head. Her identity and further details were not immediately available.

The protest by about 200 women was organized by a previously unknown group calling itself the Labor and Communist Party. An invitation delivered to The Associated Press on Sunday demanded equal rights for women and the nullification of a law allowing Iranian men to have four wives.

"We are women, we are human, but we don’t have any rights!" protesters chanted.

Some 100 police, including female officers, attacked the demonstrators and dispersed them about an hour after the protest began.

Throughout most of the confrontation, female officers beat female protesters and male police beat male protesters there to support the women. Male police generally are not permitted to touch female suspects.

"I don’t care about the police charging us with batons," said Laila, 21, who would not give her last name. "I would attend any pro-human rights demonstration in the future," she said.

None of Iran’s state-run media reported on the protest.

"They won’t report it (because) they don’t like people who think about their quality of life," said Marzia, a 34-year-old protester who also would not give her last name.

In March, police attacked about 200 women’s rights demonstrators at a Tehran park, beating women and their male supporters with batons.

Iran’s Islamic law imposes tight restrictions on women. They need a male guardian’s permission to work or travel. Women are not allowed to become judges, and a man’s court testimony is considered twice as important as a woman’s.

Despite such restrictions, Iranian women have more rights than their counterparts in Saudi Arabia and some other conservative Muslim countries. They can drive, vote and run for office.