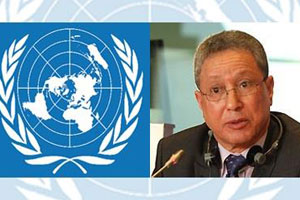 Since 2013, the year Hassan Rouhani was elected president of the Islamic Republic of Iran, we hear of an Iranian regime that promises to respect its international commitments and to respect the human rights of its citizens. Therefore it would become a respectable regime. They cry aloud that Hassan Rouhani is a moderate president and that we can do business with him. Are we facing a mirage or reality?

Having served, at a crucial period in the history of the region, as director of the Office of Human Rights of the United Nations in Baghdad, I had the privilege of being in contact with a wide variety of political, diplomatic and human rights defenders in the Middle East and North Africa. I was able to closely monitor, in practice and theory, the actions of the Iranian regime. I find it incredible how Western governments, from a campaign whose promises remain to be met, engage in a race to mark their presence in Tehran and trigger lucrative contracts with a regime they consider to now be respectable.

Well, we must not have any illusions about that! Beyond the election campaigns, we must address the fundamental laws of the Iranian regime. In other words, to understand the system in place you must be aware of the ins and outs of a constitution decreed by Supreme Leader Khomeini whose founding pillars are eternal and unchangeable. Attempting to reform them is a sin against God’s will. We are dealing with a “divine” system, a constitution that is not subject to reforms, since it is a “programmed constitution” decreed by the divine.

So what program is this constitution? It sets out the application of God’s “Sharia” law in all areas including in state relations where Sharia law prevails over international law (Article 4 of the Constitution). In other word, in the case of conflict between Iran’s international obligations and Sharia law, the supremacy of the latter prevails. This constitutional obligation of the Iranian regime challenges the UN Charter which gives precedence to international law. Likewise, it can be a threat to peace and international security. Similarly, it is a rejection of the Universal Declaration of Human Rights, the International Covenant on Civil and Political Rights, the Convention on the Elimination of All Forms of Discrimination against Women, the Convention on the protection of children, etc. The Criminal Code and the Civil Code of the Islamic Republic of Iran in force include severe violations of basic human rights against men, women and children. They approve practices belonging to another age such as amputations, stoning, crucifixion and mandatory death penalty following often unfair and discriminatory trials.

What does the constitutional program of the mullahs involve regarding the nuclear issue and the spread of Islamic fundamentalism? It includes a constitutional obligation to put all means, including nuclear power, at the disposal of the Islamic army guards of the revolution and foreign intervention units such as al-Quds Brigade, to defend the Khomeini revolution and export it abroad. It is necessary to bring these serious interventions before the United Nations Security Council so they can take appropriate measures to stop the expansionism of vilayat e-faghih. Unfortunately, the current economic situation passing through our world has decided otherwise. The states whose influence can flex the fundamentalist regime and exporter of terrorism chose their own narrow, short-term interests.

Those who compete for business opportunities that the Iranian regime can offer will discover one day that they were wrong in both choice and strategy. Lifting sanctions for this regime is a mistake. The next visit of President Hassan Rouhani in Paris must be taken advantage of by Iranian, European and international civil society, to remind decision makers in Europe and America that the appeasement of an obscurantist regime that makes the religious expansionism its divine mission, a regime that attacks its neighbours and a regime that imposes a way of life and governance that belongs to another age, is unacceptable to democratic societies that respect human rights.