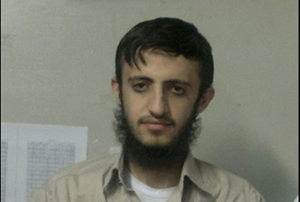 NCRI – The Iranian regime’s Supreme Court has upheld a death sentence for Barzan Nasrollahzadeh who was arrested as a school student for ‘waging war on God.’

Barzan was arrested at the age of 17 in the western city of Sanandaj on May 29, 2010. He was convicted by the fundamentalist regime’s kangaroo courts with “Moharebeh,” or waging war on God.

According to reports, Barzan’s father has said: “They took away his laptop, and after a while he was sentenced to execution for Moharebeh. He hadn’t killed anyone, nor was he tied to any group, and nor did he have a weapon.”

Barzan is currently spending his fifth year behind bars in Ward 4 of Hall 10 of Gohardasht (Rajai-Shahr) Prison, north-west of Tehran.

Iran’s fundamentalist regime on Monday, December 14, hanged a 20-year-old man in public in the city of Noshahr, northern Iran.

The man, only identified by the initials M. Kh., was 18 years old at the time when he allegedly committed his crime.

The Iranian regime has “cemented its shameful status as the world’s top official executioner of juvenile offenders after two young men were re-sentenced to death for crimes committed when they were under 18 years old”, Amnesty International said last Tuesday, December 8.

Previous articleIRAN: Two men paraded in the streets of Pakdasht
Next articleIRAN: Rafsanjani’s futile attempt to salvage the fragmented velayat-e faqih system and restore his own position