NCRI – On Friday- 21 October 2016 Mr Dirk Claes mayor of Rotselaar city in Belgium presided over a meeting of Belgian Committee of Parliamentarians and Mayors for a Democratic Iran, following is the text of the speech.

Thank you for coming to this meeting today which I have organized as the mayor of Rotselaar. I have been the mayor since 1995. For those who have come here for the first time, Rotselaar is located in the Belgian province of Flemish-Brabant and is famous for holding one of the biggest festivals in Europe. Around 300, 000 people from all over the world come here for our music festivals every year.

As the mayor I am responsible for security (police, fire service and mobility), personnel, administration and organisation, festivities, honorary and legal affairs, and tourism.

I have been following the situation of Iran for many years. When I was in the Belgian parliament (Chamber) and then in Belgian Senate, we organized several meetings on human rights in Iran. We formed a group called: Belgian Committee of Parliamentarians and Mayors for a Free Iran.
After I left the Belgian senate I have continued to lead this committee and I am happy to have found so many Iranian friends who are in exile and are working for democracy and human rights in their country.

As you all know, Iran is a religious dictatorship. After the fall of the Shah in 1979, Iran jumped from bad to worse. Ayatollah Khomeini came to power and he formed the Islamic Republic of Iran which is the first and only Islamic state in the world today.

After a brief period of freedom, Khomeini began the repression and executions. As many as 120 thousands have been executed. I have seen a book, volume 1, which includes the names of 20 thousands who have been hanged. Most of them belong to the opposition PMOI (MEK) which is a Muslim force but anti-fundamentalist and believes in a tolerant Islam, separation of religion and state and gender equality.
I have been working with PMOI (MEK) and their supporters for the last 14 years. They have suffered very much under the mullahs. They also had over 3000 of their members in the neighbouring Iraq in camps Ashraf and Liberty which were frequently attacked by agents of Iran. We in Belgium campaigned for their rights. For example I began a petition for Ashraf residents which over 300 Mayors in Belgium from both Flemish and French speaking cites signed it. 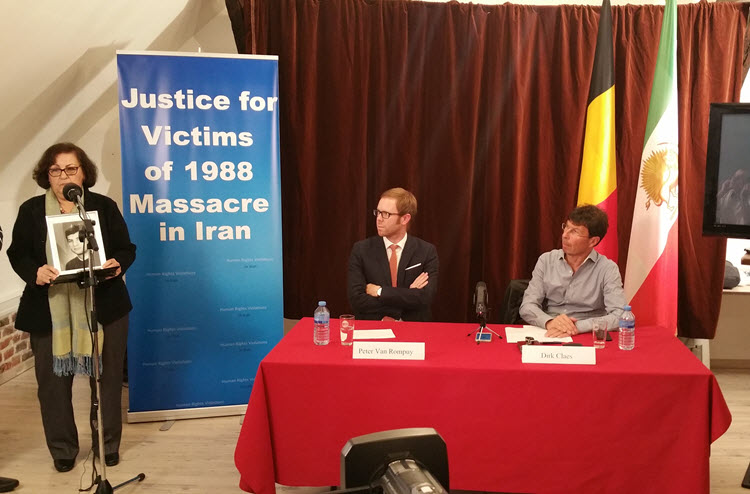 I am glad that recently these Iranian refugees in Iraq have been transferred to safety, most of them are now in Albania and some other European countries.

The main reason that I called for this meeting today was to commemorate a crime against humanity in summer of 1988, when over 30, 000 political prisoners, mostly from PMOI (MEK), were executed by the order of Ayatollah Khomeini. Many of them were serving their prison sentences and were supposed to be released soon. They were buried in mass graves and so their families did not know where to grief for their loved ones. We have a witness here today, a mother, whose son Mehran was executed in 1988. She will speak to us later.

Khomeini’s deputy who was supposed to be his successor, was Ayatollah Montazeri who protested publicly to these mass executions.

After 28 years, after that massacre, a new audio file was released by the son of Montazeri in August this year. In this audio tape, we can hear Ayatollah Montazeri, meeting members of the Death Committee in Tehran who ordered the executions in the capital. Montazeri is telling them that you will be called as the biggest criminals in the history and is appealing to them to stop the executions. He mentions that young girls and even pregnant women were executed. 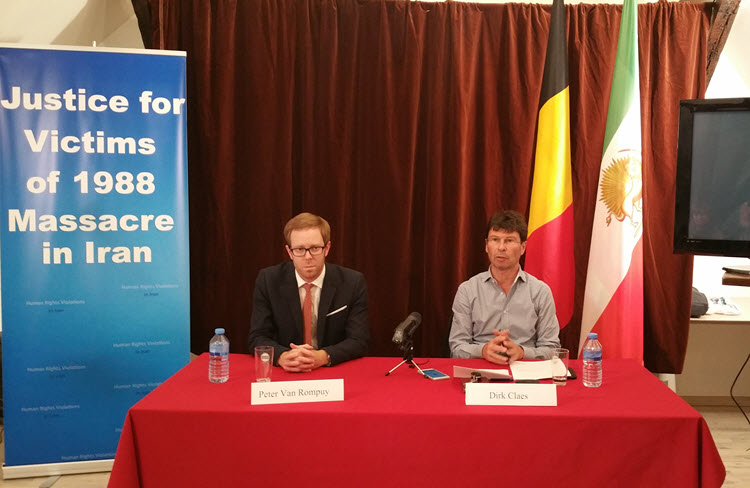 This 40 minutes conversation with the so called death committee, was recorded a few days after the start of the massacre.

It is interesting to note that one of those members of that Death Committee is the current Minister of Justice in the government of President Rouhani who pretends to be a moderate! This person has said that he is proud to have carried out the executions.

Ayatollah Montazeri’s opposition to that massacre, resulted to his dismissal by Khomeini. So Mr Montazeri paid a heavy price for this. He was humiliated and repressed by Khomeini and later by the current Supreme Leader Ayatollah Khamenei and was put on house arrest till his death in 1989.

This massacre and genocide did not stop in 1988 and in fact continues to this date. According to the United Nations, around 1000 were executed in Iran under Rouhani in 2015. Iran is currently the number state-executioner in the world per capita.

We call for the 1988 massacre to be on the agenda of the Human Rights Council. The UN High Commissioner for Human Rights must issue a call for an investigation in this regard. We urge the European governments, including the Belgian government to condition their relationship with Iran to a suspension and halt of executions. We cannot have business as usual with this regime. The issue of human rights cannot be compromised for trade and big economic contracts. We have to defend the European values of democracy, women’s rights, rights for ethnic and religious minorities and freedom.

Finally I should say this has been an honour for me to be friend of the Iranian democratic opposition in these years. They want nothing for themselves except freedom of their people. I have met the resistance leader Mrs Maryam Rajavi who has been to Belgium several times and is regarded as the enemy number one by the mullahs.

Today’s meeting is an effort to pay tribute to the innocent victims who were so brutally murdered by this regime in summer of 1988. I hope you will find it useful.

Previous article
Iran: Mass Execution of 14 Prisoners in one Day
Next article
Trial of the Revealer of audio tape concerning the 1988 Massacre in Iran