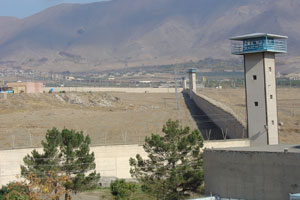 NCRI – The Iranian regime has stepped up suppression of prisoners in the notorious Gohardasht Prison in Karaj, west of the Iranian capital.

The mullahs’ infamous henchmen in the prison, including the likes of Amirian, Baqeri and Zolfali last Thursday attacked the ordinary prisoners’ section. Prisoners in Ward 3 were brutally beaten with clubs as they took their turn in the prison courtyard.

The brutal attack on prisoners, as they were fasting, was meant to spread fear among inmates to prevent any form of dissent.

The jamming devices are said to be cancerous and have placed the health of the prisoners at dire risk. The prisoners are constantly experiencing symptoms of dryness of mucus, muscle pains, severe headaches, blurry vision, vomiting and numbness.