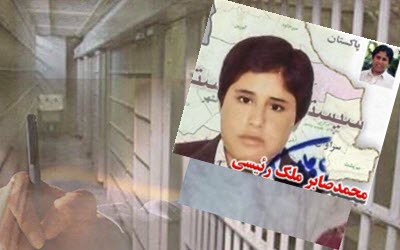 NCRI – The political prisoner ‘Mohammad-Saber Malek Raeesi’ writes a revealing letter to Asma Jahangir, the UN special rapporteur on the situation of human rights in Iran, describing parts of the inhumane conditions as well as Iranian regime’s medieval tortures in prisons.

“I’ve been suffering the worst types of tortures and inhumane conditions from the first moment after being arrested”, adds Malek Raeesi.

“I spent 21 months in intelligence detention center in Zahedan, suffering the worst types of physical and psychological tortures despite my young age. I was even tied to the torture bed, or ‘the miracle bed’ as they say, into forced confessions. I spent several consecutive weeks in quarantine in a 1.5 square meter cell with my hands and feet chained.”

While cracking down the protesters in ward five on May 25,2012, I was kicked, punched and beaten by electric batons and ended up in a solitary cell with a broken head and nose and a body covered in blood. I was then faced with the world’s worst torture until next morning.”

Later in his revealing letter, he points to his being sent into exile in Ardebil Prison, saying “ever since I arrived at Ardebil Prison, I was unlawfully prohibited by Prison’s intelligence agents from having phone calls or meeting my relatives for 15 months. I was also repeatedly subjected to harassment for false excuses.”

Concluding his letter, the political prisoner Mohammad-Saber Malek Raeesi asks the UN special rapporteur: “please consider the situation of us doomed convicts and families being oppressed by Ministry of Intelligence, Prisons Organization and the cruel judiciary, and we beg you to pay attention to these forgotten prisoners who are asking for help.”

On Wednesday 28th December 2016, Saber Malek Raeesi was beaten by the mercenaries of the prison since he complained about the cold water of bath as well as inhumane conditions. In order to protest against these inhumane conditions, this Balochi prisoner started his hunger strike on 28th December 2016.Nevertheless, the agents kept him in below-freezing temperature of outside instead of caring him.

Saber Malek Raeesi is one of the youngest political prisoners who was less than 17 when he got arrested in 2009. He was then sentenced to 15 years of imprisonment by the court of the regime and he has been serving time for 7 years.

The agents of the Ministry of Intelligence promised his release provided that he turns in his older Balochi brother.