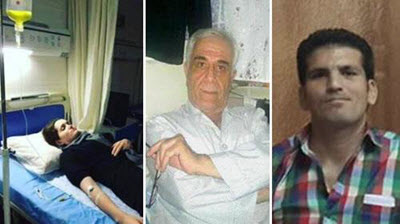 The Gohardasht prisoners had in an open letter announced that their two-day hunger strike was to show their solidarity with fellow political prisoners carrying out such an act of protest.

The political prisoners in Gohardasht said they wanted to notify the global community about the condition of these prisoners and stand in solidarity with them.

“We want people to support these hunger-strikers. Their condition is definitely critical,” the letter added.

Maryam Naghash Zargaran, a newly-converted Christian, began her hunger strike on July 5, 2016, to protest the inhumane condition of prison and to demand an unconditional release. She continued her hunger strike in support of fellow political prisoner, Narges Mohammadi, who was protesting the Iranian regime’s denial of contact with her children.

Zargaran was sentenced by the mullahs’ kangaroo courts to four years in prison on national security charges involving illegal gatherings and collusion, but she has never had these charges addressed in a proper court of law. She has been held in the Women’s Ward of Evin Prison since July 15, 2013.

Political prisoner Rasoul Hardani, suffering from MS, is in critical condition after being on hunger strike since the beginning of July. However, the criminal warden of Gohardasht Prison is preventing his transfer to a hospital.

Hardani is on hunger strike protesting the authorities preventing his release. Hardani was only 17 years old when arrested back in 2000. In the 15 years behind bars he has endured harsh conditions in the regime’s prisons. His prison sentence came to an end on August 21, 2015, yet the torturers are refusing to release him despite the fact that the coroner’s office has issued an order declaring he cannot tolerate prison conditions.

On July 17, Iranian political prisoner Arzhang Davoodi went on hunger strike and stopped taking his medications in Gohardasht Prison in protest to the deplorable situation of fellow inmates.

Having announced his hunger strike, Arzhang Davoodi wrote a statement about the inhumane conditions of the prisoners and the widespread corruption by the regime: “I will not stop my hunger strike unless the prisoners’ condition improves. The prisoners’ condition must come under the spotlight by the international human rights bodies. The special rapporteur of the UN Human Rights Council must insist on being allowed to visit the prisons in Iran and to inquire about the abnormal and inhuman conditions. The mullahs’ fabrications and accusations, the lawsuits and the spread of corruption, addiction and other serious issues such as incurable illnesses must be revealed.”

He addresses Ahmed Shaheed, the United Nations special rapporteur on the human rights situation in Iran, and all lovers of human rights in all international forums:

“After years of imprisonment and illegal charges made by the mullahs, with this action I just want to raise the consciences of all human beings to the inhuman conditions of the prisoners. The brutal prison guards in different prisons such as Rajai Shahr (Gohardasht) have made the prisons as a cemetery and slaughterhouse for our youths by importing goods and contrabands, including drugs. These drugs are the main sources of income for them in the prison system and I am ashamed to express the consequences of such crimes and the circumstances that now prevail on the prisoners.”

Arzhang Davoodi, at the end of his statement, added: “from Sunday July 17, 2016 I will go on medication strike and hunger strike so that the world devotes attention to the current situation. I anticipate that I will be threatened and transferred to solitary confinement by the head of the prison, Mohammad Mardani.”

Mr. Davoodi was arrested in 2003 and held in solitary confinement for prolonged periods during which he was tortured and and denied access to a lawyer and his family.

He was sentenced, in March 2005, to 25 years’ imprisonment, reduced to 10 years on appeal, on charges of “spreading propaganda against the system” and “establishing and directing an organization opposed to the government” for his peaceful activities, including directing a cultural education center, according to Amnesty International. In May 2014, he was sentenced to an additional two years’ imprisonment, on the charge of “insulting the Supreme Leader.”

Arzhang Davoodi was also sentenced to death for his political opinions and peaceful exercise of the right to freedom of expression.

He is believed to have been accused of having ties with the PMOI (MEK) merely because in prison he insisted on calling PMOI by its official name, Mojahedin, rather than by the term used by the Iranian authorities, Monafeghin (hypocrites), according to a 2014 urgent action appeal by Amnesty International.