Reconsidering Western optimism a year after the Iran nuclear deal 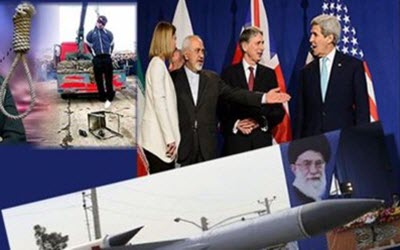 The “hope of moderation” in Iran under Hassan Rouhani has proved as false as it was naïve, writes Prof. Ivan Sascha Sheehan.

“Not only was the rhetoric inconsistent with supreme leader Ayatollah Ali Khamenei’s repressive stances on free speech, academic freedom, minority rights, religious pluralism, gender equality, and democratic activities but Rouhani’s follow-through on promised reforms proved elusive. Though it may not matter to Western officials, the failure to enact reforms greatly impacted Iranian citizens who came to rue their initial support for the apparent moderate,” Prof. Sheehan wrote on Tuesday in The Hill.

“Over the past three years, Iranians have come to realize that Rouhani has no intention of ending house arrests, reducing political imprisonment, or limiting the censorship and media repression for which the Islamic Republic is notorious and confidence in the president has dropped markedly.

Under Rouhani’s watch the regime has executed its citizens at a higher rate than any UN member state. Today, the regime boasts the highest rate of executions per capita in the world, surpassing even China. More individuals have been executed under Rouhani’s tenure than in any similar period in the past twenty-five years.

In fact, the situation under Rouhani has deteriorated so significantly that many demoralized Iranians publicly declared their commitment to sitting out the parliamentary elections that took place earlier this year to elect the Assembly of Experts, the clerical body that will be responsible for choosing the successor to Supreme Leader Khamenei.

After Rouhani’s failure to live up to his moderate credentials, it is clear once again that the Iranian people have no political option that will represent them within the existing system. Those who have abandoned Rouhani and the fraudulent electoral processes that serve Tehran’s interests are embracing what many Iran observers have long believed: The only way for Iran to have a different future is under a different regime.

Growing opposition to Rouhani’s administration has paralleled a rise in support for the platform of the National Council of Resistance of Iran (NCRI), the theocratic regime’s democratic, Paris-based parliament-in-exile. The resistance group, who supports a non-nuclear Iran that is peace with Western powers, is hosting a prominent international gathering for democracy in Iran in Paris on July 9. The NCRI is the principal opposition to clerical rule and reflects the hopes of millions inside and outside of Iran who have tired of fundamentalism and instability, human rights violations and proxy wars.

The gathering for Iranian freedom, which will be held just days before the anniversary of the nuclear agreement, will be attended by tens of thousands of expatriate Iranians and their international supporters – including distinguished officials and academics from around the globe. The event is expected to result in broad calls for solidarity with the Iranian resistance and support for regime change from within.

The timing of the international demonstration for freedom and the anniversary of the negotiations that resulted in the Joint Comprehensive Plan of Action with Iran provides a unique opportunity for Western policymakers to reconsider the optimism that resulted in the nuclear deal, as well as unfortunate developments since 2015.

The skepticism with which the Iranian opposition approached Rouhani’s rise proved to be prudent: Three years after taking office, Tehran is not democratizing or moderating its domestic policies, nor is it emerging into a more responsible power with which the world can have confidence. The opposition group’s firm conviction that Rouhani would not undo the hardline ideologies that give that regime life is more accurate than ever.

In an effort to profit from new trade agreements with the Islamic Republic, policymakers and lobbyists who influence them are keen to use all available pretexts to keep the moderation narrative alive. But it is critically important that Iranians not fall victim to the deceptive rhetoric and narrative of moderation that has predominated among American and European policymakers over the past year. The false narrative has resulted in a porous nuclear accord that reinforces Tehran’s campaign of instability and undermines hopes for a brighter future.

Last July the Joint Comprehensive Plan of Action seemed like a good reason to give Rouhani a pass. But with a year’s worth of hindsight it is increasingly difficult to keep up this charade. In the run-up to the nuclear deal, the West ignored numerous warning signs – including Iranian negotiators’ ever-escalating demands and red lines, as well as a stream of information from the Iranian resistance regarding undisclosed Iranian nuclear activities.

It is now even more difficult to ignore the provocations and illicit activities that have taken place since the JCPOA negotiations were concluded. Nothing has taken its place as a symbol of the moderation narrative and nothing will do so as long as the regime presides over escalating rates of executions, denial of plainly evident human rights abuses, violent attacks on the opposition both at home and abroad, and non-cooperation with the international community on matters including Iran’s stockpiling of ballistic missiles capable of carrying nuclear weapons.

It is clear that last July’s optimism was misplaced and that Western policy toward the Islamic Republic must change. Western support for a regime engaged in repressive and destabilizing activities in Syria and Iraq – resulting in forced migration with global security implications – is not sustainable or sensible.

On the anniversary of the Iranian nuclear deal, Western powers are wise to conclude that the global shift to a pro-engagement policy with Tehran simultaneously served the regime’s interests while facilitating the repression of individuals promoting freedom, democracy, human rights, gender equality, the rule of law, and a non-nuclear Iran.

World powers who treat the Iranian regime as a fixture of the Middle East landscape or the best of bad options only nurture a regime that has rightfully earned decades of scorn for human rights violations and condemnation for support of global terrorism.

Robert Kagan of the Brookings Institution made the case in 2010 that regime change in Tehran is the best nonproliferation policy. The one-year anniversary of the nuclear negotiations this July is a good time to conclude that regime change from within via the organized Iranian opposition is also the best hope for a more peaceful future in Iran.”

Dr. Ivan Sascha Sheehan is director of the graduate program in Global Affairs and Human Security in the School of Public and International Affairs at the University of Baltimore.