On November 16, the Iranian regime’s President Hassan Rouhani will arrive in France for a two-day visit. A major rally and march have been organized to coincide with the visit. Protestors will seek to draw attention to the dramatic increase in the number of executions since Rouhani took office, as well as the recent rocket attack on Camp Liberty, where thousands of Iranian dissidents reside in Iraq. 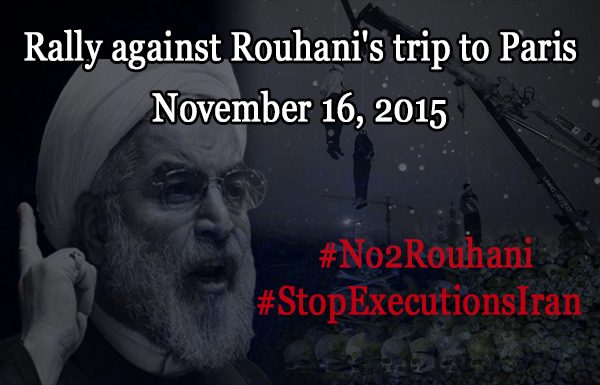 Demonstrators will also address the Iranian regime’s export of terrorism and its all-out support of Bashar al-Assad and massacre of the Syrian people.

The rally will be led by Iranian expatriates, who will be joined by French citizens and international supporters of the Iranian resistance. Several renowned human rights organizations have joined in sponsorship of the event.

Cross-party French lawmakers will be among the speakers at the event, as will political and social dignitaries from France and from across Europe.

Elaborate street performances and exhibitions have been planned for the event, to depict examples of Iranian human rights violations.

The human rights situation has been deteriorating rapidly in Iran. More than 2,000 individuals have been executed during Rouhani’s tenure. This is the highest rate of executions in the past 25 years, and it reflects an increase over figures that had already secured Iran’s place as the nation with the most executions per capita.

Camp Liberty, the place of residence in Iraq for more than 2,000 members of the People’s Mojahedin Organization of Iran (PMOI or MEK), was targeted on October 29 by the Iranian regime. The barrage of 80 rockets killed 24 residents of the camp and wounded dozens of others.

Previous articleMrs. Rajavi hails arisen Azeri compatriots and describes insults against them as insults against all Iranian people
Next articleSaudi Arabia urges UN to condemn Iran regime’s intervention in Syria