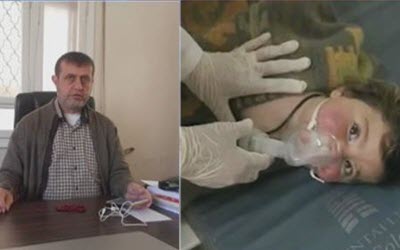 NCRI – In an interview with INTV from near Idlib, Dr. Mohamed Foras al-Jendi, Health Minister of the Syrian transition government, stipulated the high number of casualties in the Khan Sheikhoun attack was due to Assad’s use of toxic gas, adding the number of casualties may rise.

“At 6:42 am on Tuesday, Sukhoi warplanes of the Syrian regime’s air force bombed the northern areas of Khan Sheikhoun in Idlib Province.

Displaced locals of northern Hama Province were living there and the bombing led to a high number of casualties suffering from toxic gas. There were nearly 560 casualties, including more than 100 martyrs,” he said.

“These casualties were transferred to field, private, and general hospitals across Idlib Province. Due to the high number and urgent need for care, the hospitals were not able to provide care for all of the patients and some were transferred to Turkey… They were suffering from suffocation, breathing difficulties, lung disorders and convulsions,” al-Jendi continued.

Families died in their homes and in the streets. Those who rushed to provide help, including a number of White Helmets members, suffered from gas effects, reporters on the ground said.

“At 8 am on Tuesday, I called the hospital. A large number of people had been hurt after the chemical attack. They were transferred to the hospital and most of them showed symptoms of sarin gas,” said Dr. Ahmed al-Asad, a physician in Khan Sheikhoun, in an interview with INTV.

“Some patients had symptoms caused by chemical substances. Some had their heart beats and breathing stop. Nearly seven people died the moment they reached the hospital. More than 50 people were brought to the hospital and many were in dire conditions,” he added.

“Following the defeat suffered by Assad and Iran’s proxies, who were trying to gain victories on the ground, and after the heavy blow they received in north Hama, they staged planned air attacks on various vital centers and residential areas filled with civilians to get the highest number of innocent civilians killed,” said Ahmed Abu Osama, a spokesman of the Free Syrian Army in Idlib in an interview with INTV.

“That the massacre was staged by this criminal regime’s warplanes in Khan Sheikhoun is the best proof of these crimes because Assad’s warplanes targeted Khan Sheikhoun with missiles carrying chemical substances. 100 martyrs and 400 suffocated, most of them being women and children,” he added.