U.N. Rapporteur: We Are Concerned of Freedom of Speech in Iran 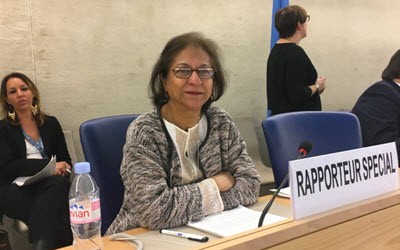 NCRI – Asma Jahangir, the United Nations Special Rapporteur in Human Rights in Iran criticized Tehran for the lack of freedom of speech.

“My concerns are that when people are arrested and threatened, they don’t talk and when they don’t enjoy freedom of speech, this is the result. Then we see they get jail the young and bloggers,” she said in an interview with VOA.

This interview was conducted after the 34th UN Human Rights Council session and Jahangir in her report referred to numerous human rights violations in Iran.

Jahangir also mentioned the issue of political prisoners as the second important issue of human rights violations in Iran, saying action against them is a message to other individuals that if you don’t agree with us you will be treated as such. This is unacceptable, she added.

Next come the issue of lawyers whom are chosen by lawyers, she said. The Bar Association is controlled by judges. Many lawyers are prevented from doing their work. Lawyers defending political prisoners or prisoners of conscience are imprisoned afterwards.

Jahangir went on to criticize Iran’s judiciary, saying it controls all actions. Everything depends on the judge’s ruling, who himself is not independent or unbiased. Therefore, there is no respect for due process.
In her report Jahangir called on Iran to stop public executions and referred to the high number of executions, restrictions on freedom of speech, discrimination against ethnic and religious minorities, and women.