The coronavirus entered Iran from China at the end of January 2020 and spread across Iran due to the Iranian regime’s inaction, lying, and cover-up. It has so far claimed the lives of over 26200 people. The mullahs’ regime, particularly the huge financials foundations affiliated with the regime’s supreme leader Ali Khamenei, despite having financial resources, have been no help to people and aimed to use the epidemic as an opportunity, and as a lever of pressure to lift international sanctions.

From the first days of the outbreak, the Iranian Resistance has emphasized that the assets of huge financial foundations like the Execution of Imam Khomeini’s Order (EIKO), Astan Quds Razavi and other huge foundations possessed by the supreme leader, should be made available to the public to fight the coronavirus. The regime, instead of providing these assets to the needy people, is pushing the poor people to go to work and end the quarantine and at the same time blaming the international sanctions for the spread of the epidemic. The fact that the regime’s supreme leader holding huge rich foundations have vastly reflected in Iran, even the regime’s media, are mentioning this fact.

The state-run Jomhuri – e Eslami daily, in its editorial by mullah Massih Mohajer, who has been the editor-in-chief of this newspaper since 1981, focused on this issue. Massih Mohajer was an advisor to previous presidents of the regime in Hashemi Rafsanjani and Mohammad Khatami’s administrations. He has been the representative of the regime’s current president, Hassan Rouhani at the University of Islamic Religions since September 2013.

The full translation of the Jomhuri – e Eslami daily newspaper article is below: 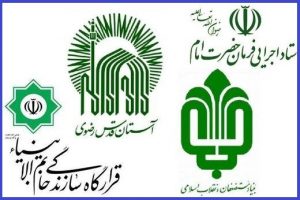 The editor-in-chief of Jomhuri – e Eslami newspaper: What will the Execution of Imam Khomeini’s Order, Mostazafan Foundation of Islamic Revolution and Astan Quds Razavi do if they do not spend their money for the impoverished people?

The editor-in-chief of Jomhuri – e Eslami newspaper wrote: “Considering the economic recession caused by the coronavirus, what will the big financial institutions such as the Execution of Imam Khomeini’s Order, the Mostazafan Foundation of Islamic Revolution and Astan Quds do if they do not spend their money for the impoverished people?”

Massih Mohajei, the editor-in-chief of the Jomhuri – e Eslami daily wrote: “The movement of people’s participation in financially supporting the weak social classes, who’ve got financial difficulties due to the coronavirus outbreak, is among the blessed phenomenal of the present time. This movement is very much alike to the popular sacrifices during the ‘Sacred Defense,’ [regime’s antipatriotic war with Iraq], so it has been more supported and extended.”

The point that should be noted in this movement is that the popular help, as extensive as it is, won’t cover all the needs that are created by the recession due to the coronavirus. This help could heal some wounds but won’t resolve all problems. To resolve the problems, great financial powers should come to the scene. They are highly capable, and their property belongs to the people.

These financial powers include the Execution of Imam Khomeini’s Order, Mostazafan Foundation of Islamic Revolution and Astan Quds Razavi. The vast financial and facilities these centers possess, if used to help the damaged society sectors by the coronavirus, will resolve these sectors’ problems rapidly and completely. These assets and facilities belong to people and should be exactly used in such situations to resolve people’s problems.

We know that the Execution of Imam Khomeini’s Order takes some actions in form of donating some equipment or cash, Mostazafan Foundation is about to give one million toman [ equivalent to $61] gift card to porters, and the Astan-e Quds helps the slum-dwellers in Mashhad or poor families in other parts, but these actions are not even comparable to the financial capability of these centers. These institutions should fully and limitlessly take action and fulfill all the needs of those people who are grappling with poverty in the current hard economic situation immediately.

When we hear the words of those responsible at these centers of financial power about their actions to help the damaged society sectors, we come to this conclusion that they either are not aware of the dimensions of the blow to the people or not willing to spend the money they possess to help them. Those who are not government, institutions, organizations and corporations employees create two-third of the country’s population.

Few of these people have significant financial means to cope with the current situation, and the rest, who make up the majority, have become poor and destitute. Some have lost their jobs, and this dangerous trend continues. The government, due to its numerous financial problems amid sanctions and decline of revenues and the heavy cost it must pay to combat the coronavirus, can’t afford to fulfill the demands of the social sector damaged by the coronavirus.

It is also the government’s responsibility to protect the health and well-being of the people, and it cannot escape the limitations of this framework. It is very difficult to properly understand the conditions that require these centers of financial power, which belong to the people, to come on the scene and fulfill their historical mission. If they do not spend the money, they have to save the poor, how do they justify their philosophy of existence?

Previous articleIran: Confidential Instructions by the Central Monitoring and Command of the State Security to Suppress Any Protests, Rebellions in Prisons
Next articleIran – Coronavirus: Over 26,200 Fatalities in 266 Cities

Iran’s State Media: You Don’t Realize the Depth of Crisis!

Round-up of Iran State Media: Be Aware of a Restive Society!