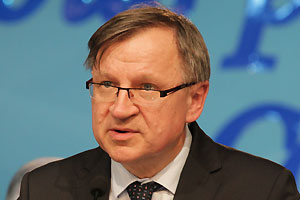 The West must not form an alliance with Iran – the world’s leading sponsor of state terrorism – in the war against Islamic State terrorists in the Middle East, Lithuanian lawmaker Egidijus Vareikis has demanded.

And Europeans who believe Iran could play a temporary role in the conflict are ‘opportunists who are a disgrace to European values’, he said.

Mr. Vareikis who is member of the Lithuanian delegation to the Parliamentary Assembly of the Council of Europe (PACE) wrote on the EurActiv website that the extremists who have been growing in recent years have been aided by the actions of the Iranian regime in places like Lebanon, Syria and Iraq.

“Some of my fellow Europeans would suggest that Iran could play a temporary role and that forming an alliance wouldn’t be bad because we wouldn’t be arming them. These opportunists are a disgrace to European values and to the values of the entire western world.

“We as Europeans cannot put our stamp of approval on a regime responsible for the bombing of a Jewish Center in Argentina that left 85 civilians dead and a regime that is the main sponsor of misery and terror throughout the globe.

“How could we preach human rights while violating those rights indirectly in the most grotesque ways imaginable?

“Those who seek to pursue a policy that would leave Europe a morally bankrupt continent should also remember that Iranian inclusion is no answer to Iran’s nuclear program.

“According to Mayram Rajavi, the President of The National Council of Resistance of Iran (NCRI), the prerequisite for change is making Iran feel the heat. Pursuing policies of appeasement and appealing to the good nature of a bloodthirsty regime would certainly have no such effect.”

Mr Vareikis added: “If we are to combat Islamic extremism at home and abroad, we must tackle its sources, not its symptoms. The Iranian regime has acted as the world’s leading exporter of terror and despair – showing a little resolve on our Iran policy will go a long way at keeping us safer here in Europe.

“While problems with extremists will not disappear, confronting the growing threat of Islamic extremism, starting with Iran, is a powerful first step in protecting the safety and the freedoms of a Europe we can be proud of.”