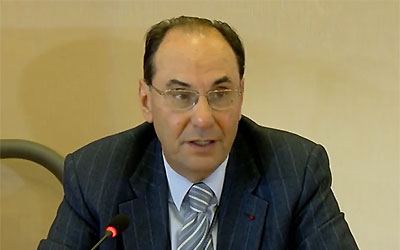 European countries should not repeat their past mistakes of falling for the results of the Iranian elections, a former vice-president of the European Parliament told a conference in Brussels on Wednesday.

Dr. Alejo Vidal-Quadras, who is currently the president of the Brussels-based non-governmental organization, In Search of Justice, told a conference at the European Parliament entitled “EU policy on Iran after Nuclear Accord” that the West should cooperate with the Iranian opposition under the leadership of Mrs. Maryam Rajavi and support their 10-point plan, which has been supported by thousands of elected politicians in Europe and in America.

Mrs. Rajavi’s program advocates a secular and non-nuclear Iran, equality between men and women, and abolishment of the death penalty.

Below is the text of the speech by Dr. Alejo Vidal-Quadras at the European Parliament on March 2, 2016:

As it has been recalled by several speakers before, last week we witnessed elections in Iran. And the western media, the European, American media, have published many comments on these elections. And it must be said to make things clearer that these elections have not been the type of elections we are used to see in the free world.

First, because in these elections, there are no opposition candidates.

Second, because those candidates who stood, all of them of course, loyal supporters of the regime, have to be confirmed by a special body called the Guardian Council. Even the name of the body is frightening, no? “The Guardian Council.”

Every candidate in the elections must have a full heartfelt and practical commitment to the regime and to the Supreme Leader. Even so, half of those who registered to stand in these elections – all of them, as I said, loyal to the regime – half of them were disqualified by the Guardian Council because they had expressed at some moment a slight difference of opinion that the Supreme Leader did not like.

Therefore, if you have a look at the members of the new parliament, you arrive at the conclusion that to call the different factions present in this parliament, call them reformists, or moderates, or conservatives, it makes no sense. These words have some meaning for us here in Europe, but in the reality of the Iranian regime, they’re all the same: They’re all murderers, human rights violators, or terrorists.

The list of the so-called moderates under the leadership of former president Rafsanjani and present acting-president Hassan Rouhani includes the current minister of Intelligence, and three former Intelligence ministers, all of them with a sinister record of crimes and torture of opponents. In fact, one of them, Ali Fallahian, has been indicted in international courts for his role in masterminding several assassinations of opposition members who were living abroad in Germany or Switzerland, and also because he had a prominent role in the very famous terrorist attack in Buenos Aires against the Jewish association.

On the other hand, in the list of the conservatives, you can find the name of the current head of the judiciary and two former heads of the judiciary responsible for issuing thousands of death sentences.

The regime has claimed that the turn-out of the elections was very high, they said that it’s almost 70%. This is also a big lie. They take the foreign journalists to some selected voting stations which have been well-prepared, and so it’s not difficult to project this false image of a high turn-out. If it were real elections, the mullahs should have accepted international observers, which is quite a routine in many countries. The European Parliament in fact is used to sending missions of observers to different elections all over the world. But they, of course, do not accept observers. They can claim any turn-out, 70, 80, 90%, whatever they like because are there is no objective way to check what is happening, and rigging the elections is very easy. In fact, what they do is that whatever the turn-out, the outcome of the elections, they multiply the number of voters by three or four, and this is the official result that they make public.

Even though European governments are looking for moderate Iranians, we know moderate Iranians. They should cooperate with the NCRI, under the leadership of Mrs. Rajavi, and support their 10-point platform, 10-point program – which has been supported by thousands of elected politicians in Europe, in America – a program that advocates for a secular and non-nuclear Iran, for equality between men and women, separation of religion and state, and abolishment of the death penalty.

This is a truly democratic and moderate movement that deserves our support. Let me say to conclude that as far as we are concerned in Europe, we should not make ourselves happy by these false elections.

Some of the comments one can read in the press these days about the elections are, frankly, ridiculous. The regime has used these elections to make deals with the West, while at the same time it continues its suppression of the opposition. Western countries, European countries have fallen into this trap before, and they are falling again. And frankly, it’s time not to repeat these mistakes, most of all, because if we do so, the first losers are the Iranian people.

Previous articleIRAN: All the men in Roushanabad village executed
Next articleIran regime intensifies disinformation campaign against PMOI and Camp Liberty residents to pave the way for another massacre