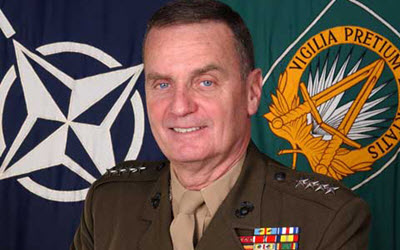 London – General James Jones, former supreme allied commander of NATO, has always been involved in the Middle East affairs, problems and causes. In an interview with Asharq Al-Awsat, Jones expressed relief towards the “tremendously successful” meeting between Deputy Crown Prince Mohammed bin Salman bin Abdulaziz, Second Deputy Premier and Minister of Defense, and US President Donald Trump where both agreed upon “risks threatening the Gulf.” What follows is an excerpt of this interview.

Jones suggested forming a Gulf coalition similar to the NATO.

“The NATO succeeded in facing the existential threat posed, then, by the Soviet Union and helped in dissociating it,” Jones added as he affirmed that US will be pleased to join this dialogue if the idea of a Gulf NATO was endorsed by Saudi deputy crown prince and Sheikh Mohammed bin Zayed Al Nahyan, Crown Prince of Abu Dhabi and Deputy Supreme Commander of the UAE Armed Forces.

When asked to evaluate US-Saudi relations and to point out how they will differ compared to the presidential tenure of Barack Obama, General Jones replied that “Trump and the government were clear that Iran is a state that can’t be trusted and that it represents a threat to the region and is a source of terrorism. I think that the common vision of Saudi deputy crown prince and other Gulf leaders towards Iran enhanced the ties with the new US administration.”

“How can the US cooperate with the Saudi kingdom and the Arabian Gulf countries to limit the Iranian intervention in their affairs and to halt Iran’s terrorist operations?”

Jones answer was as follows, “I see that if we are facing an existential threat then we should be decisive, double the sanctions and do all that we should to make Iran change its attitude radically.”