Iran Regime and Allies Counter Attack Against the U.S. Strike on Syria 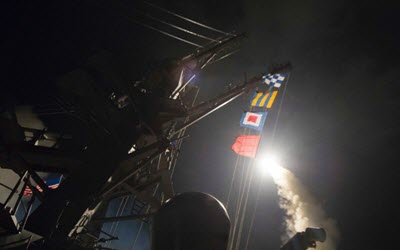 NCRI – This article by Abdulrahman al-Rashed appeared in Al-Arabiya on April 9, 2017. The following is an excerpt from it.

Reactions from Tehran, Damascus and allies to the US strike on Syria were exactly as expected. They all issued statements condemning the strike against the Shayrat military air base. The US strike came in response to the Syrian regime’s mass murder of civilians using chemical gas on Friday morning.

Later that day, Iranian, Syrian and some other media outlets and social networking pages launched their propaganda campaign via sharing fake news that questioned whether the Syrian regime was behind the toxic gas attack in Idlib. They marketed a narrative which stated that the opposition had shelled Khan Sheikhoun. Then they marketed another narrative that claimed that the Syrian air force shelled “armed terrorist opposition-held areas” and the strikes happened to hit a terrorist depot containing chemical gases that resemble those previously used by ISIS in Iraq. According to this narrative, the opposition is the party that committed the crime of possessing internationally prohibited chemical weapons. This story however was only believed by those who support the Assad camp.

Then this propaganda amended its stance the next day in order to confront the new development represented in Arab reactions welcoming the American strike on Syria. The Arab popular stance welcomed and thanked the move after it had been angry from Trump’s administration due to reports accusing it of taking restrictive measures against Muslim refugees and travelers.

In response to people’s joy and sense of victory, fake news outlets claimed that the US strike was a mere charade carried out in agreement with Russia. Forged photos, which were published to show that the US strike narrative was false, showed some burnt airplanes inside concrete bunkers that weren’t shelled. Other news reports admitted that the strike happened but said it was a failure and did not achieve any goals.

It’s true that influencing the Syrian and regional public opinion is an important part of the psychological war but it’s not what’s decisive.
Military operations are usually political acts. The American strike sent political messages that are directed to the Syrian, Iranian and Russian governments. Messages to the Syrian public opinion come in second. The strike, which destroyed a few jets and killed six military personnel from the Syrian regime, will shake the conviction of those who support the regime so they don’t bet on it anymore. It will also provide a dose of hope to the opposition following political disappointments and military defeats during this past phase.

Shelling al-Shayrat air base will not stop the aggression of the military alliance in support of the regime in Damascus and proof of that is that it resumed shelling civilians on Friday, in further defiance of everyone. The US strike will not alter the balance of power on ground. It’s also unlikely that there will be new American military strikes. The US ambassador to the UN said the possibility of US’s military intervention depends on the Syrian regime’s use of chemical weapons, and this is unlikely at the time being.

What’s new and important is political positioning. According to the Trump administration’s statements, it seems that it has changed its stance and decided to be a party in the Syrian crisis, while in the past, it said it was only concerned in fighting ISIS in Syria. Therefore, Damascus and its allies have become far from that victory they had announced.

Until a week ago, most regional and international powers announced or conveyed their approval to the Syrian solution as per Moscow’s desire thus leaving Assad in power and ending the armed opposition. However, the chemical attack and other attacks on civilian areas occured. This is in addition to the arrogant remarks of Syrian government officials against other countries in the region. Once again, the Assad regime has proven that it cannot change its behavior and that it’s responsible for the major relapse in Syria, regardless of whether the Iranians and Russians agree to its crimes.