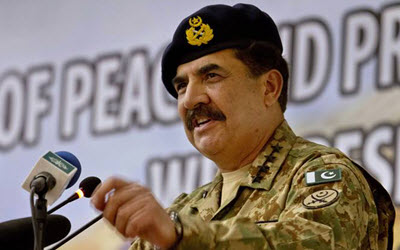 ISLAMABAD: Iran today said it has reservations on the appointment of Pakistan’s former army chief Gen Raheel Sharif as the head of the Saudi-led 39-nation Islamic military alliance, warning that it may “impact” the unity among Muslim countries. ‘The Economic Times’ reported on April 3, 2017.

Iran’s state-run IRNA news agency quoted the country’s Ambassador to Pakistan Mehdi Honardoost as saying that Tehran had conveyed its concerns to Islamabad.

“We are concerned about this issue… that it may impact the unity of Islamic countries,” Honardoost said.
“But that does not indicate that Iran is satisfied with this decision or it has accepted the same,” the envoy was quoted as saying by Dawn newspaper.

He said Tehran had informed Islamabad that Iran would not become part of such a military alliance, adding that neither had Iran been extended an offer to join a coalition of this sort.

He proposed that all important Islamic countries come together to form a “coalition of peace” in order to resolve their issues “rather [than] forming a controversial military alliance”.

Gen Sharif, who retired as army chief last November, is likely to assume command of the anti-terrorism alliance, being dubbed the ‘Muslim Nato’, this month, the newspaper reported.

The Pakistan government had issued an NOC for Sharif to join the alliance after an understanding was reached between Pakistan and Saudi Arabia on the matter, retired Maj Gen Ijaz Awan, a defence analyst and close associate of the former army chief, said.

Pakistan had initially found itself in the cross-hairs of Middle Eastern politics as Saudi Arabia named it as part of its newly formed military alliance of Muslim countries meant to combat terrorism, without first getting its consent.

However, after initial ambiguity, Islamabad had confirmed its participation in the alliance, but had said that the scope of its participation would be defined after Riyadh shared the details of the coalition it was assembling.

The coalition was envisaged to serve as a platform for security cooperation, including provision of training, equipment and troops, and involvement of religious scholars for dealing with extremism.

The Saudi government had surprised many countries by announcing that it had forged a coalition for coordinating and supporting military operations against terrorism in Iraq, Syria, Libya, Egypt and Afghanistan, the report said.

Iran, Saudi Arabia’s archrival for influence in the Arab world, was absent from the states named as participants, as proxy conflicts between the two regional powers rage from Syria to Yemen, it added.