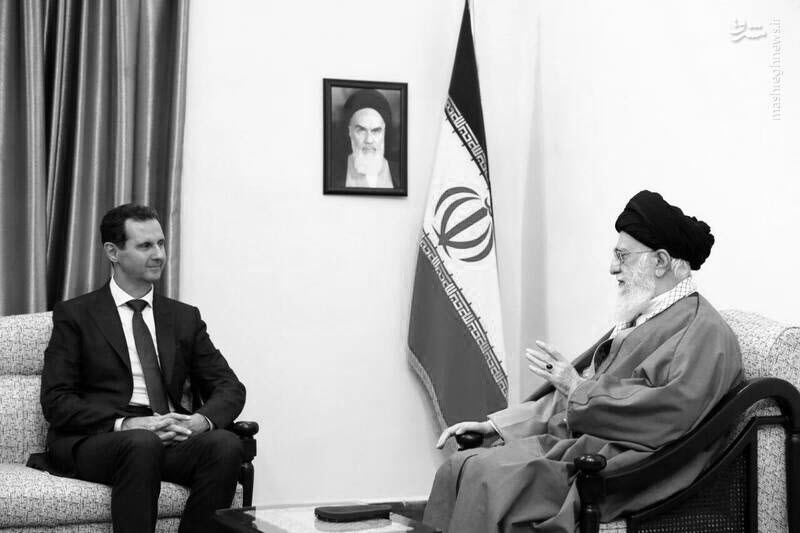 On Monday, Syrian President Bashar al-Assad visited Tehran to mark the declared ‘victory’ of his forces with the support of Iran.

During Assad’s visit, regime’s Leader Ali Khamenei praised the Syrian ‘victory’, and even hailed it as an Iranian victory over American ‘plots’ in the Middle East. (These plots include defeating ISIS and challenging Iranian military aggression.)

Iran has long been militarily involved in Syria under the pretext of countering ISIS or protecting shrines or whatever else the Regime comes up with, but their true mission has been to suppress the Syrian’s people’s uprising with the twin goals of gaining political control of Syria through Assad and discouraging the Iranian people for rising up against the mullahs.

Iran is a destabilising force in Syria, prolonging the civil war for the Regime’s gains, and enabling Assad to survive through its various militias, including the Islamic Revolutionary Guard Corps and Hezbollah.

But Syria is far from the only country where the US and Iran are squaring off in proxy wars. In Iraq, the Iran-backed Popular Mobilization Units (PMUs) are questioning how long US troops are to remain in Iraq following the defeat of ISIS, with militia leader Qais al-Khazali arguing that the PMU will be there to secure the border against an ISIS resurgence.

Although the US recently announced that they were pulling troops out of Syria, the majority are being redeployed to Iraq. It’s not just about stopping ISIS, but also about keeping a close watch on Iran. That’s why Khamenei is trying to convince Syria and Iraq to reject and resist the plan. Iran has something to hide.

Lebanon, where Iran-backed Hezbollah have political and military control, is also a place for rising tensions between the US and Iran. Notably, both the US and UK have designated the whole of Hezbollah as a terrorist group in the past few months, rather than just the military wing, with the US seeing this as part of their “maximum pressure” campaign on Iran.

And this is only likely to get worse given the resignation of Iranian Foreign Minister Javad Zarif, as many believe that this is likely to result in a more “hard-line” policy from the Regime.

The world must increase the diplomatic and economic pressure on the Iranian Regime in order to allow the Iranian people to overthrow the theocratic dictatorship and usher in a free, democratic Iran. This is the only policy to ensure peace in the Middle East and freedom for the Iranian people.