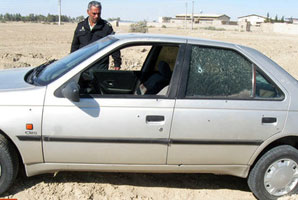 The Iranian regime’s Revolutionary Guards Corps (IRGC) claims that has arrested “a team” of the suspected assassins of a local judiciary official.

“The members of a team, who assassinated the prosecutor of Zabol city, were arrested following a complicated intelligence work,” said the report without providing further information.

Deputy Head of the IRGC’s Public Relations Department General Ramezan Sharif told the IRGC affiliated Fars News Agency that the assailants had no political motivation and affiliation and were drug-traffickers.

“This team was no way related to opposition groups,” “the terror has been conducted in relation to smuggling,” he said.

Earlier today Head of Zabol Security Council Hooshang Nazeri told the same news agency that “the terrorists who assassinated the Zabol Prosecutor, Mousa Nouri, and his companion have already confessed to their crime”.

Mousa Nouri, the prosecutor of Zabol city in Iran’s southeastern Sistan and Baluchestan province, and his driver were killed Nov 6 while they were on their way to office.

On October 26, the Iranian regime’s judiciary had hanged a group 16 political prisoners in the city of Zahedan in the province.

As admitted by Mohammad Marzieh, the prosecutor general of Zahedan, hanging of these prisoners who have been in prison for a long time, had been carried out in revenge for a number of revolutionary guards killed in Saravan.
He said, “These people were executed in response to martyrdom of border-soldiers in Saravan. They were affiliated with Jaish al-Adl grouplet, the Ansar and other wicked groups and this was just one retort to that night’s incident”. (Tasnim news agency, affiliated with Qods Force, October 26)

According to the state media, on October 25, in the attack on a center of Iranian regime’s forces in Saravan, 17 border guards were killed.