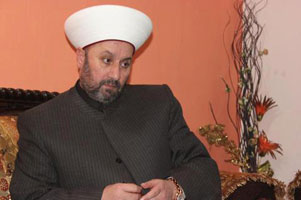 Dr. Rafe Al-Refai, a prominent Iraqi religious leader said on Friday: “It is rather amazing that the ‘freedom loving revolutionaries’ in Iraq are accused of being affiliated with terrorist groups such as ISIS.”

In a video message about the recent developments in Iraq, Dr. al-Refai said: “They are not ISIS, they are freedom loving men who are weary of being oppressed by Nouri al-Maliki. But, government of Nouri al-Maliki and his allies accuse them of being affiliated with ISIS and terrorism in order to create disagreement between revolutionaries and the people of liberated cities.”

The Iraqi religous leader described the liberation of cities of Mosul and Takrit, and the besiege of city of Kirkuk, as a struggle for liberation of Iraqi people especially the Sunnis from the oppression by Maliki.

Refai called “ISIS” a terrorist group but in the meantime he called on the youth in Iraqi cities to help the armed tribal fighters to liberate the country from the “Maliki’s oppression.”

The Iraqi relgious leader thanked those who handed over their weapons to the revolutionaries. He addressed them by saying: “The revolutionaries are your brothers and have no ethnic inclinations and will not desecrate any of the Shiite or Sunni or Christian holy sites.”