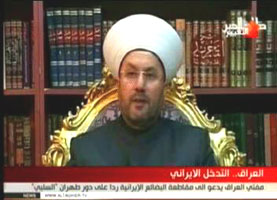 Brussels, Asharq Al-Awsat —Sheikh Rafi Al-Rifa’i, the Sunni Grand Mufti of Iraq, hit out at the Iraqi government on Sunday, saying dialogue with Prime Minister Nuri Al-Maliki was “pointless,” and described the events in Fallujah as “genocide.”

Rifa’i’s comments came as Iraqi military forces continued to surround the city of Fallujah in Iraq’s Anbar province, after it was seized by insurgents in January. Iraqi security forces also continued to clash with insurgents in other areas of the province.

The situation in the province remains chaotic, with different tribal factions siding with or against the central government in Baghdad in its attempts to reassert control of the Sunni-majority province, which was the site of major anti-government protests last year against perceived sectarian bias on the part of the government and security forces.

Adding to the turmoil, members of jihadist groups linked to Al-Qaeda are reported to be among the insurgents, including members of the Islamic State of Iraq and Syria (ISIS). The Iraqi military declared a 72-hour ceasefire in Fallujah on Saturday, which is due to expire today.

Rifa’i accused the government of being “unable to hold dialogue and only knows how to kill, oppress and displace, and knows oppression in all its meanings.”

He added: “We never stopped talking, and now it [the government] is fighting us in our province, Anbar Province, under the guise that we are ISIS. Anbar was the province which fought against Al-Qaeda, and Maliki and his party and supporters had no role in fighting terrorism in the province. Now they are fighting the people of the province as if they were terrorists, and the solution is for the international community to play its role because it was they who imposed on us these ugly types who took us to this stage, and the international community must rectify the damage it caused.”

Rifa’i, who was in Brussels with a group to attend a conference on human rights in Iraq organized by the European Parliament, said that sectarian tensions in Anbar and the rest of Iraq had been stoked by political leaders for their own ends.

In his speech at the conference, Rifa’i said: “I come to you from a country where human rights are totally ignored. I left on the ground in Fallujah my brother’s blood which had not yet dried, where he was torn to pieces with three of his neighbors in front of their wives and children, the same as dozens of children, women, old men and youths who were killed cold-bloodedly by the arbitrary bombardment&&8212;part of the government’s strategy in its war on the people [and opponents] under the pretext of fighting terrorism.”

He added: “The Iraqi government, represented by the prime minister and commander of the armed forces, exercises hateful sectarianism which uses excessive force against Iraqi people, and the Sunnis in Iraq have suffered most from the injustice of this government.”

Rifa’i warned that what was taking place today in Fallujah and other areas of Anbar was “genocide in which the current Iraqi government [has] used all kinds of heavy and medium weaponry . . The Iraqi government was intent on dividing the people, leading to a civil war in which the only loser would be the Iraqi people.”

He told Asharq Al-Awsat: “Sunnis ruled the country for 1,400 years and what did the Shi’ites say? They said they had no role in Iraq. I say to them that, for instance, 70 percent of Ba’ath Party members were Shi’ites and 37 of 55 most wanted [members of the previous regime] were Shi’ites, and everyone knows that the Ba’ath Party was not Sunni and did not rule people in the name of Sunnis.”

In response to a question on whether he agreed with comments at the conference about the suffering of Christians in Iraq, Rifa’i said: “Of course. I was visited two weeks ago by the new patriarch of the Levant Church along with the ambassador of the Vatican and other Christian dignitaries . . They know that we care about them as we do about ourselves, because religions share fate . . and this fate is enough to make us brothers who love and support each other in order to eradicate misery from this country.”

The Sunni Mufti said Iraq needed internal and external initiatives to find solutions to the current situation in the country and that he personally supported the internal solutions.

He also pointed the finger of blame to some outside the country. “Everyone knows there are external forces that have agendas that work inside Iraq, which means we need internal and external solutions . . we demanded that the EU and the international community do their moral and legal duty because they were part of the reason which took Iraq to this stage and they must correct the mistakes they made.”

He added: “There are no problems between Iraqis, but there are political gangs who have taken over people’s money, their fortunes and their dignities . . and the way out is to dispose of these gangs. [They] came in the name of political and religious parties [but] all we saw from them was that they had no link to religion whatsoever.”