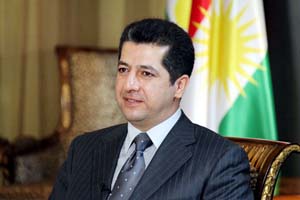 Source: Al-Arabiya*
Mr. Masrour Barzani, National Security Advisor for Iraqi Kurdistan Region, warned on the role of Shiite militias supported by Iran in the battle against the Islamic State, known as ISIS, to retake Tikrit.

In an interview with BBC’s HARDTalk program he noted that using the assistance of the militias by Government of Iraq can lead to a problem greater than ISIS since their presence will up the sectarian tensions between the Sunnis and Shiites in Iraq.

Some 20,000 Shia militias supported by Iran are working with some 3,000 Iraqi security forces to rout ISIS from Tikrit. Government of Iraq considers retaking of Tikrit is an important step in kicking out ISIS from other regions currently under its occupation with Mosul, the second largest city of Iraq, a very important target.

Mr. Barzani said: “The presence of Shiite militias is a problem greater than ISIS. We should all look at this as a war against ISIS that we should fight together.”

“But if revenge operations or blood revenge among tribes, religions and races ensues, the problem is aggravated,” he warned.

Previously, on Wednesday, General Martin Dempsey, U.S. Chairman Joint Chiefs of Staff, had also expressed alarm of the consequences of Shia militias affiliated with Iran controlling Tikrit and the prospect of Sunnis in this city getting killed by sectarian groups.

Speaking at the Pentagon while accompanied by the British Defence Minister Michael Fallon, Mr. Carter added that all of Iran’s actions in Iraq are under scrutiny and that a sectarian war in Iraq will act as a significant factor to defeat the struggle against ISIS.

These expressions of concern come as videos and reports of burning houses in and around Tikrit by the Shiite militias are received. Government of Iraq has stated that it would investigate these videos and reports. Prime Minister of Iraq Haider al-Abadi emphasized that the government is not after taking revenge on the residents in these areas and charged that “aggressions” were taking place by those it called “infiltrators”.