Professor Sheehan: Iranian opposition has a “profound role to play” 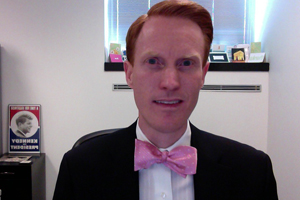 On Thursday, IranFreedom.org hosted an online question and answer session with Professor Ivan Sascha Sheehan of the University of Baltimore. Professor Sheehan is the director of the graduate program in negotiation and conflict management at the university’s School of Public and International Affairs. In recent years, much of his scholarship has focused on Iran and its democratic political opposition.

In keeping with this background, Sheehan’s introductory remarks and his responses to questions from international journalists focused both on prospects for internal change in the Islamic Republic and on critiques of US-led negotiations over Iran’s nuclear program.

The program with Professor Shaheen came one day after a similar question and answer session with Ambassador Robert Joseph, who formerly served as United States Special Envoy for Nuclear Nonproliferation.

The two scholars’ talks touched on many of the same points despite each having a different central focus. Both expressed the view that the emerging nuclear agreement between Iran and the P5+ failed to establish sufficient verification of Iranian compliance, and that Iran’s flat refusal to grant unfettered access to international inspectors was highly suspect.

But Sheehan’s independent remarks largely emphasized the general need for change in US policy toward Iran, including the need for support of Iranian opposition movements, and particularly the National Council of Resistance of Iran.

That movement, Sheehan said, represents the “best hope” for the defeat and transformation of the clerical regime currently ruling Iran. “This is a point I’ve been making again and again,” Sheehan said with reference to both his scholarship and his regular communication with policymakers on Capitol Hill. “And I’ve found a terrifically receptive audience.”

When asked about Western reactions to the NCRI, Sheehan said the group was getting “quite a bit of attention in the halls of Congress.” This was illustrated in April when the organization’s president, Maryam Rajavi spoke before a hearing of the House Foreign Affairs Subcommittee on Terrorism, Nonproliferation, and Trade.

Sheehan described this as an “extraordinary” event, which reflected “great enthusiasm that has been growing for some time” for Rajavi’s presence in the policy landscape.

According to Sheehan, the Iranian Resistance has a “profound role to play.” Western support for the movement’s goal of regime change in Iran represents a crucial third alternative to tactical military strikes and “unending cosmetic diplomacy” with the Iranian regime.

Criticizing the US for acting as if the clerical regime’s continued rule is inevitable, Sheehan declared that that regime is “not a fixture of the Middle East landscape,” but could be replaced with a “nuclear free, democratic, and secular” government, as represented by the organized opposition and the massive protests that have recently spread across Iran.

“As a scholar of the Middle East I can say without hesitation, the greatest threat to peace in the region is the Iranian regime,” Sheehan said. As such, he told his online audience that what is needed for the region is regime change in Iran, as distinguished from the “regime modification” that has lately been pursued by the Obama administration.